How not to be your own selfish pig 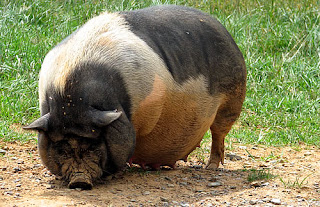 Little Johnny is never told “No” by his parents. They are afraid to damage his little self-esteem. Johnny grows up believing he can have what he wants when he wants it. His wife and children suffer. Little Susie learns to be a skillful manipulator of her parents’ emotions as a toddler, honing the skill to perfection as a teen. She grows up to wreak havoc on a series of churches, pushing for her way or the highway. The churches suffer. Little Bobby is told often by his parents that he is smarter than all of the other kids at school. He learns how to use his tongue and quick intellect to control others, and when confronted, his verbal skills enable him to make his accusers feel like they are the ones with the problem. His wife and children and every relationship in his life suffers.

The Bible says of our sin, “All we like sheep have gone astray; we have turned — every one — to his own way …” That’s one definition of sin, going our own way. It is part of our sinful human nature to want to do what pleases us, not what pleases God. It is easily identified in the toddler who knocks over his brother’s LEGO tower simply because that’s what he wants to do at the time. Or, in the 10-year-old who disobeys her parents and gets on Facebook after Mom and Dad have gone to bed. Or, in the 15-yearold who cheats on a test in class. Those are all serious expressions of what it means to sin. In each case, the child or young adult is putting aside what his parents have taught him, or at least what the Lord has written on his heart, which our conscience bears witness to. In each of those cases, a wise parent will step in and discipline, yes, discipline his child. Why would a parent choose not to discipline his or her children? It may be because he is pursuing his own sin agenda and would feel like a hypocrite if he were to chasten his child. Or because she is afraid to confront her child, not sure how that will go and horrified that it could even lead to the child not liking her for a day or two. It may simply be because the parents choose the façade of “peace and quiet” in the home rather than the hard work of training children.

What happens when parents do not discipline their children by dealing lovingly but firmly with sin? A downward spiral is set into motion. Sin is like a fire. It is not satisfied with a lie here or a selfish thought there. Given free reign, sin will consume every area of your life. Not only that, but I have to be completely honest here. Sin makes people stupid. I’ve seen the reality of what the Bible means when it says, “For where envy and self-seeking exist, confusion and every evil thing are there.” Sin blinds and brings confusion. Clear thinking becomes muddled, then erratic, even evil and dangerous. There’s hope. The bad news that we all have gone astray and each one of us has turned to his own way is not all the news. The rest of that verse says, “the Lord has laid on Him (Jesus) the iniquity of us all.” We don’t have to stay in the downward spiral. We don’t have to be stuck on stupid. We don’t have to destroy our marriages and families. God has made a way for us to not be our own selfish pig.
By Mark Fox