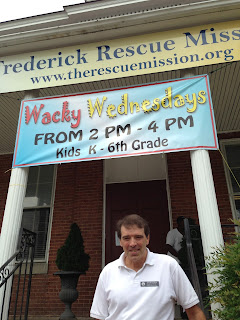 Arnold Farlow has run or ridden a lot of miles and worn a lot of hats in his career. He and his wife, Beth, rode their bicycles across the United States early in their marriage. He has ridden in 26 of the 50 states, and most of the counties in Maryland, Virginia and North Carolina. He has also completed four marathons, including the Boston.

Arnold’s career has included recruiting and teaching for the Adult Basic Education program at Alamance Community College. He has worked in real estate, at a carpet store, in college ministry, at Allied Churches of Burlington and has pastored two Methodist churches in the mountains. But since 2005, Arnold has served as the executive director of the rescue mission in Frederick, Md., and I believe he has found his sweet spot there. I recently had the opportunity to visit Arnold and see how he spends his days working toward the goal of the mission: to show Christ’s love and rescue the least, the last and the lost from poverty, homelessness and addiction.

“We focus on two objectives here at the mission,” Arnold said. “To change lives now. And to change lives for eternity.” In pursuit of the first goal, the mission served over 148,000 meals last year. They also gave away literally tons of clothing and groceries to those in need. In pursuit of the second, and more important, goal, Arnold said they open their doors every day to men who are wanting a life change, and who are willing to join the one-year residential program at the mission.

“The mission works to see eight changes in the men who live here,” Arnold said. “1 — Be passionate for Jesus. 2 — Be victorious over addiction. 3 — Be connected to a local church. 4 — Have a mentor or accountability partner. 5 — Be reconciled to his family as much as possible. 6 — Have a GED or appropriate level of education. 7 — Have a financially sustaining job. 8 — Have a safe and suitable place to live.”

It occurs to me that these are worthy goals for every man, whether he is homeless or not. What kind of changes would take place if every church were intentional about helping each of its members reach these goals?

I asked Arnold to tell me about the men who show up at the mission. He said, “There are basically three types of homeless people. There are the ‘chronically homeless.’ You could give them an apartment and groceries, and they’d be right back out there in that tent, or pushing that grocery cart. Many suffer from mental illnesses; others simply choose to remain homeless. Then there are what I call the ‘crisis homeless.’ These people have lost a job or a spouse or their health and have ended up on the street. They don’t know what to do so they come here. The final group is the crooks. They are gaming the system, dealing drugs, ripping people off.” Arnold smiled and said, “The problem is, all three of these can look the same. They don’t wear a nametag, telling us which group they’re in. So, we fish with a net, not a rod and reel. We love each one and try to help them. Jesus said, ‘As you did it to one of the least of these my brothers, you do it to Me.’”

As I met the staff at the mission and talked to some of the residents, one thing stood out to me. They love Arnold Farlow. Maybe that’s the key to the success he has found at the mission. He loves them with the love of Jesus. They love him back. Many of them stay around, get the help they need, and end up living healthy and productive lives.

Arnold came to know Jesus years ago after he ran his Datsun 240-Z into a telephone pole at 110 mph and walked away from it. “I knew there was somebody bigger than me who wanted me alive,” Arnold said. “A few months later, I came to know the Lord. Since then there’s always been this thought that what he’s done for me, everybody needs to know about it. That’s always driven me.”

If you drive through the hills and around the Civil War battlegrounds that dot the Frederick landscape, you may see Arnold riding his bike. He loves it. If you visit the mission in downtown Frederick, you will see Arnold helping the least, the last and the lost. He loves that even more.