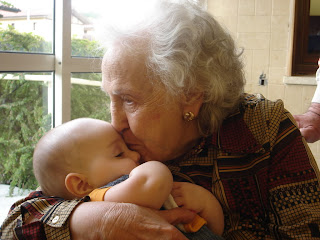 While speaking at a conference recently, I talked about preparing our children to leave home. I shared about Hannah, our oldest daughter, who spent this past year away at Regent University, and is home for the summer. Then I said, “She’s still my baby girl.” After the workshop, one woman lingered at the book table while people were talking to me or looking at the materials. Finally, she was the only one in the room with Hannah and me. She said with tears in her eyes, “You will never know how much that meant to me when you said your daughter is still your baby girl.” Then she turned to Hannah and said, “I’m envious.” Here was a grown woman who is still hurting over a father who was indifferent to her. Or worse.

We can learn a lot from the Scriptures. Like, how should we respond when a baby is born? When Ruth had her baby, a group called “the women” brought the child to his grandmother, Naomi, so they could do three things. First, they praised God for the baby. They did that because every baby is a gift from God, not a “punishment” to the mother, or a “burden to the environment.”

Second, they spoke a blessing over the baby, even asking that God would make his name renowned in Israel. Can we ask that God make our children’s names great? Oh, yes. Not in the sense of what the world thinks of as a “great name,” which comes attached to money and fame. But asking instead that their reputation, their godly character, would be great. Here’s what God thinks about that: “A good (or great) name is to be chosen rather than great riches, and favor is better than silver or gold.”

Third, the women praised the mother, telling Naomi that her daughter-in-law Ruth was better to her than seven sons. This was the ultimate compliment in ancient days. It was a son who carried on the family name. It was a son who could work and provide for his mother. And to have seven sons? You were a very rich person indeed. Read chapter one of Ruth and see Naomi’s lament when she returned to her homeland a widow and childless. “I went away full, and the Lord has brought me back empty.” Now the women brought Naomi’s grandson to her to say, “No, Naomi, you came back full. You just didn’t know it. God is good and He has provided for you in your old age.”

The women placed Obed in her arms, and after more than 30 years, Naomi was holding a baby again. And the relationship between grandma and grandson began, which clearly was going to be much more daily than a grandmother who lives 100 miles or 1,000 miles away from her grandchildren. What a blessing. Some of you remember with great fondness the relationship you had, or have, with your grandparents. They were the oldfashioned grandparents, the kind who wanted to develop a relationship with their grandkids, not the modern kind that don’t have time for that because they’re too busy playing. Sadly, sometimes it is the parents who deny the grandparents the privilege of spending time with the grandchildren. But neither happens here. Naomi is not too busy for Obed. Ruth does not deny Naomi the privilege of caring for her grandson. Obed grew up loved deeply by a mother, a father and a grandmother.

He would always be Ruth’s “baby boy.” But oh how blessed he was to have a godly grandmother.


J. Mark Fox is the author of “A Faithful Man” and the pastor of Antioch Community Church on Power Line Road in Elon. You can Tweet him @jmarkfox and can find all of Mark’s books on Amazon or other online sellers. Email Mark at markfox@antiochchurch.cc