From Type 1 Diabetes to Ironman 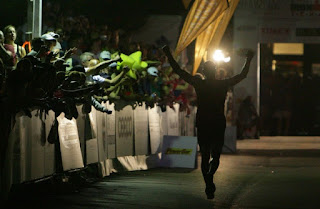 Jeff Akin found out he had Type 1 diabetes on a Thursday afternoon in the spring of 2002. Four days later the Ironman World Championship committee notified him he had been selected in the lottery to compete in Hawaii.

“I couldn’t swim, and I didn’t own a bike,” Jeff said. The Ironman competition in Hawaii consists of a 2.4-mile swim in open water, followed by a 112-mile bike ride across the lava desert and a 26.2-mile run.

I interviewed Jeff and Amy Jo Akin in Black Mountain last week, wanting to find out how this man had overcome diabetes to compete in dozens of triathlons, marathons and shorter races in the past 11 years.

“The doctor told me that day, ‘If you don’t fi nd a way to take care of yourself, you’ll be gone before long,’” Jeff said. “So when I got the news on Monday that I had been selected for Hawaii, I was shocked. I remember coming home and telling Amy Jo.”

“We had spent the whole weekend researching diabetes,” Amy Jo said. “So, when Jeff told me he had won the lottery, I thought there was money involved.” She laughed and said, “But we don’t even play the lottery.”

Jeff had not told Amy Jo about entering the lottery for the race. “There were only 50 selected out of more than 2,000 applicants,” Jeff said. “Everybody else competing that day would have qualified in other races. But the Ironman founders wanted it to have a ‘common man’ element. I didn’t tell my wife because I didn’t think I had a chance!”

Thus began a six-month journey to prepare for the big race. Jeff swam hours of laps in a pool, bought a road bike and started logging miles, and pounded the pavement day and night. Amy Jo, though concerned about her husband’s health concerns and knowing the toll this competition would take on his body, saw a bigger picture.

“When I saw how much this meant to Jeff, how much he wanted to do this, I pulled myself together and became his biggest fan,” she said.

Jeff’s day in Hawaii began at 7 a.m. and did not end until more than 15 hours later.

“When I stood on the starting line that morning,” Jeff said, “I had no idea what would be required that day or what I could do.”

What Jeff learned has become a valuable truth for him to live by. “Aside from the training and all we gained from that, I learned that most of us can do more than we think.”

Jeff likes to encourage men to get in shape by just starting with small things. “Park far out,” Jeff says. “The irony is the same man who says he just got a membership at the Y and wants to get in shape will circle the parking lot at Wal-Mart four times looking for an easy space. Park far out! Not only will that give you some exercise, it may even give you an opportunity for witness.” The Bible says we should live in that place of “always being prepared to make a defense to anyone who asks you for a reason for the hope that is in you.”

Jeff and Amy Jo know about hope. The Lord taught him how to control diabetes and so much more.

“Start small,” he says to men when he speaks on the subject. “Do what you can today. Go for a walk with your wife tonight. A walk and a talk. Start there.”

You can hear the interview in its entirety at www.healthychurchradio.com
By Mark Fox