Starting early has its advantages 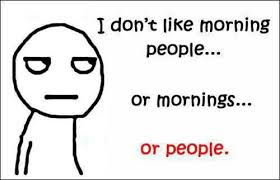 If you have been following this column for the last month, you know we are tracking Boaz’ progress towards marriage to Ruth. It is early morning now, and we find Boaz sitting at the gate. He is there because everybody passed through the city gate at one time or another, especially men going to their fields early in the morning. Boaz was not going to risk missing the one man in the city whom he needed to speak to: The man who was a closer kinsman to Ruth than he was, and therefore would have first right of refusal in marrying the young widow. Hey, don’t judge. It was part of the Jewish culture then. The point is, Boaz wanted Ruth to be his wife, so he got his frame out of bed early to see if he could make that happen.


In a recent podcast, Michael Hyatt, former CEO of Thomas Nelson Publishing said this: “Morning people tend to: Make more money. Be more productive. Be healthier and live longer. Be happier and more satisfied in their lives.” (Gallup Poll, 2007) Some of my readers are groaning right now, saying, “But that’s not me. I am not a morning person. Not until about the crack of noon.” If that’s you, there’s good news. Being a “morning person” or a “night owl” is not genetic. You were not born with an inability to smile before 10 a.m. It is a preference that conditioning makes into a habit. Anyone can learn to get up early.


In his book, “America the Beautiful,” Ben Carson wrote that one of his summer jobs in college was as a supervisor for a highway cleanup crew. He directed a group of young men who picked up trash along the highway and put it in huge plastic bags. It was a hard job, and by mid-morning the sun was blistering and there was no shade beside the expressway. The guys were not enthusiastic about the job at all. So Carson said, “You guys don’t want to pick up garbage in the hot sun, do you?”


“You got that right!” they replied.


“Then why don’t we start when it’s cool out? How about six in the morning?” Carson asked.


“You must be crazy!” they said. “What are they teaching you in that fancy school?”


He explained to them how much more efficient they would be in the cooler weather. And then he said he would pay them for eight hours work if they filled up 100 bags, whether it took them seven or even six hours to do it. He wrote, “You have never seen young men work like these young men did. They had 200 bags filled by 8 a.m.!” The people in charge of the program were flabbergasted. They said, “Carson’s crews are amazing, but we never see them.”


When people who want to go to church on Sundays choose to sleep in instead, we say they worshipped with Priscilla Pillow. Or, they “didn’t get blanket victory.” One of King David’s mighty men killed a lion in a pit on a snowy day. Vance Havner said, “That’s amazing, considering it’s hard to get a church deacon out of bed on a rainy morning.”


If getting started early is a problem for you, and you want to change your ways, here are a few tips. Make a plan and ask someone to hold you accountable. Put your alarm clock across the room. Establish a consistent bedtime. Follow Jesus’ example who “rising very early in the morning, while it was still dark … went out … and there He prayed.”


J. Mark Fox is the author of “A Faithful Man” and the pastor of Antioch Community Church on Power Line Road in Elon. You can Tweet him @jmarkfox and can find all of Mark’s books on Amazon or other online sellers. Email Mark at markfox@antiochchurch.cc