God does make provisions for the poor 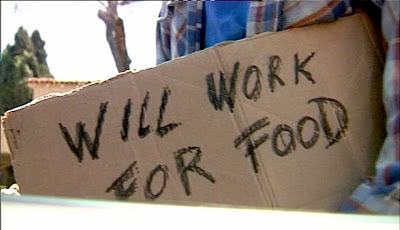 The story of Ruth provides a powerful illustration of a biblical truth: God has made provision for the poor. When Ruth and Naomi arrived in Bethlehem with no husband and no means by which to make a living, Ruth said to her mother-in-law, “Let me go and glean.”
There was no safety net for the poor in Israel, at least not one that was provided by the government. Instead, the poor were to be provided for by individuals. God instructed the Jews in the book of Leviticus not to strip their vineyards bare, and not to pick up the fruit that fell to the ground, and not to glean their fields right up to the edge.
“You shall leave them for the poor and for the sojourner. I am the Lord your God.” God basically said, “Sorry, Woody Guthrie. This land is not your land. It is Mine. You are the steward. I am the owner. And part of your stewardship is to use part of your land, your business, your income, to make a way for the poor or the stranger to live.” We have a responsibility to help the poor. But look at how it was set up. The poor were never told that they could just sit home and those with means would eventually show up at their doorstep with a basket of gleanings from the field, saying, “Here, I worked hard all day in the hot sun so that I could not only provide for my family, but for your family as well.” Neither were the poor told to just go stand beside the fields where the people were working hard in the heat of the day and hold up signs that said something like, “I am poor. I need your help.” No. God loves the poor and has a plan to provide for them. But that plan does not include stripping their dignity away along with the resources that they have already lost. He commanded that they be allowed to come and work for what they needed.
On a recent trip to South America, we dug latrines for families on an island where there is no running water. Behind door No. 1 there were several generations of women, including a grandmother, a mom, a sister and several children. These we may have expected just to sit back and watch while we did the work. That was not the case. The women had done the preliminary work of getting the stone and sand so the job site was ready. They served Cokes to the team as they worked in the heat. They cleaned up the site and got it ready for the walls to be built around the latrine.
Behind door No. 2, however, we found a totally different scenario. The “man of the house” was sleeping on the couch the whole time we were digging a latrine in his backyard. He never once came outside and grabbed a shovel and said, “Hey, let me help.” It should be easy for us to discern the difference between someone who wants others to subsidize his lifestyle of unemployment … and someone who is truly willing to work for food. And will do it.
That’s one thing I love about Ruth. She took action. She went to work to provide for herself and her mother-in-law. Granted, she was able-bodied and capable of hard work. There are those who cannot work, and the safety net for them should include family, church and community. But Ruth was able, so she went to work. We can learn from her example.