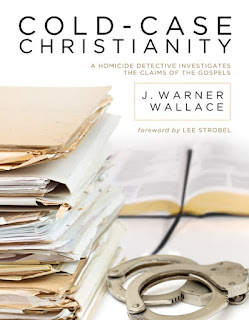 Just in time for Easter! Amazon is offering Cold-Case Christianity by J. Warner Wallace (Kindle edition) for free for a limited time. I'm actually reading this book right now (in print, as you might have guessed if you follow this blog), and really enjoying the fresh approach to Christian apologetics.

The similarities between J. Warner Wallace and Lee Strobel are strong (former atheists using their professional expertise to examine the claims of Christianity) but I dare to say I enjoy Wallace's writing and approach even better than Strobel's. There just seems to be less of an agenda behind the writing of a cold-case homicide detective than that of an investigative reporter (at some point, Strobel's feigned skepticism just started to feel too forced).

Get Cold-Case Christianity for free on Amazon!


"Christianity could be defined as a “cold case”: it makes a claim about an event from the distant past for which there is little forensic evidence. In Cold-Case Christianity, J. Warner Wallace uses his nationally recognized skills as a homicide detective to look at the evidence and eyewitnesses behind Christian beliefs. Including gripping stories from his career and the visual techniques he developed in the courtroom, Wallace uses illustration to examine the powerful evidence that validates the claims of Christianity."