The Gospel message will stand 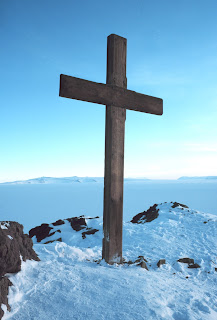 In the final paragraph of his last-recorded letter, before he greets those whom he loves, Paul issues a warning to Timothy to beware of one Alexander who “did me great harm,” and who “strongly opposed our message.” That set me thinking about the difference between message and methods. Much of what Christians protest about one another really has to do with the latter. There’s the story about two preachers who were standing on the side of the road holding signs. The first sign read, “The End is Near.” The next read, “Turn around now before it’s too late.” One driver flew past and yelled, “Get a job, losers!” followed closely by another who screamed, “Get lost, you religious nuts!” A few moments later the preachers heard the screech of brakes, followed by two loud splashes.

One preacher said to the other, “Do you think we should change our signs to say ‘Bridge Out’?”

You may not like those who stand on the street corners and preach or hold up signs that warn of impending judgment, but your argument is more with methods than message. You may not like the fact that some pastors give an altar call every Sunday morning and others, hardly ever. That’s methods, not message.

You may not like the way an author like C.S. Lewis uses fantasy to write about the Gospel. Method, not message. It is part of the Christian maturing process that teaches us to distinguish between method and message, and to give each other great leeway with the former. Not with the latter. The message of the Gospel, as preached by Jesus and explained by the Apostles, must not be changed in any way. When someone changes it, or opposes it, to use Paul’s language, we must beware.

Dietrich Bonhoeffer saw it clearly in the very earliest days of Hitler’s reign in Germany. Der Fuhrer made it illegal for Jews who had converted to Christianity to be members any longer of the German church. Bonhoeffer wrote in response, “What is at stake is by no means whether our German members of congregations can still tolerate church fellowship with the Jews. It is rather the task of Christian preaching to say: Here is the church, where Jews and Germans stand together under the Word of God; here is the proof whether a church is still the church or not.” Strong message, but one that is supported by the teaching of Scripture: Someone who opposes the Gospel is a heretic, and a church that rejects the Gospel is apostate. Its lampstand has been removed.

I know many of you saw the Super Bowl a few weeks ago. One of the most popular $3 million advertisements during the game had this tagline at the end: “The one thing that’s true is what’s true for you.” That message clearly opposes the truth of the Gospel. In fact, you could use that statement by L. Ron Hubbard, a credo that underpins the Scientology cult, to justify Hitler’s slaughter of more than 11 million people. It was “true” for Hitler that Jews and other non-Aryans were inferior and therefore expendable. Hitler’s philosophical hero, Friedrich Nietzsche, prophesied in his book “The Will to Power,” that a race of rulers would rise up, highly gifted in intellect and will, a superhuman race. William Shirer wrote this: “That in the end Hitler considered himself the superman of Nietzsche’s prophesy cannot be doubted.”

We can agree to disagree on methods: how we will proclaim the good news of the Gospel. The Gospel message, however, must stand. It will stand.