Nate and Tara Ariel left Antioch 14 months ago with their seven children and moved to the island of Bocachica, off the coast of Cartagena, Colombia. Cindy and I just returned from spending a week with the Ariels, seeing firsthand how they live and the difference they are making in this impoverished community of 9,000 people. Here is part of an email that Cindy wrote about Tara’s life there: 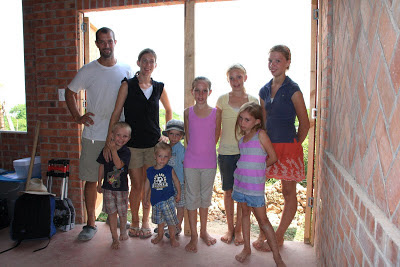 “It was amazing beyond words to see how God has knit them together with the Bocachicans and given them the understanding that those people are their neighbors and friends. Without that, I don’t see how they could be content there. Jesus is truly all we need, but in our relationship with Him, He gives us love for those around us and a desire to give ourselves to them and to receive from them. He has taken what the Ariels were to people here (in Burlington) and just planted that same thing there. It felt surreal to watch and try to process it in my mind and heart. I could see the community between them and others, and it made us see the people as ‘real’ and as friends, too. The best way I can describe it is that it is a true ‘incarnation,’ just as Jesus was incarnated on earth for us. He came to be one of us, so He could show us God’s love and hope. The Ariels are becoming one with the Bocachicans.

“I can hardly describe to you the hardships Tara has to endure just to live there. There’s the dirt, heat, animal dung tracked into her house, the flies and bugs, the fungal skin irritations, carrying water up a dirt hill a quarter mile to her house along a rutted and trash strewn path, and the constant visits from neighbors. She spends one whole day a week taking a boat into Cartagena to grocery shop at a market in a dangerous part of town because it’s the cheapest place to shop. She said it smells terribly of urine and rotten food, but she has made friends with some of the sellers and they watch out for her. Then she has to carry her groceries back to the dock and take the boat back to the island and to her house...all by herself. And when she takes her children on the boat, there are no life jackets for children provided, so she sits with her boys around her, so that if the boat capsizes they will be near her in the water and she can try to save them. The miracle is that she has accepted these things as part of normal life, and she is content and happy. She holds cooking classes for the children and women once a week, and she teaches children English on Saturdays. I’m just scratching the surface of what she does, and I haven’t even told you of the ministry Nate has with the men, and the children have with their banana bread making and befriending the children. I can’t wrap my mind around it yet, but I am so proud of them and so humbled.”

The Bible says that Jesus “emptied Himself, by taking the form of a servant,” and that he “humbled Himself by becoming obedient to the point of death, even death on a cross.” Those who follow him will do the same. The Ariels certainly have. Nate and Tara are opening their hearts and their home to the Bocachicans, becoming one with them, for the sake of Christ. This is what incarnation looks like.

The story of Cindy is a reminder of how easy it is to live in discontented selfishness. I pray for their heart for people.