I like to go through my journal at the end of the year and see what I learned. I offer four of the top 10 for your consideration. 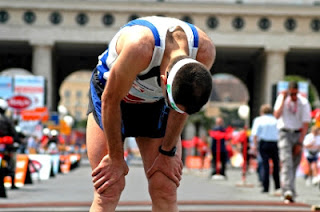 “The last four miles of a marathon are a lot harder than I expected.” I wrote that two days after the race. I also wrote, “It was basically a situation of mind over matter, me telling my legs (which were screaming for me to stop) that they would make it, that we had gone this far together and we weren’t going to quit now.” There was great relief and an even greater sense of accomplishment as I crossed the finish line. The experience proved to me again that God has endowed his creation with endurance beyond what we often see because we don’t put ourselves in a place where it can be pushed to the limit. We hear Christians say, “Well, you know God will not put you in a situation that you cannot handle.” Nonsense. God specializes in that very thing because when we are pushed to the limit of what we can do, his strength is on display.

“Good news, you don’t have cancer.” That may be the sweetest combination of six words in the English language that I heard all year. The biopsy came back negative and I felt like the second half of my life was just beginning. A friend of mine heard me talking about this and he is a cancer survivor. He said it is even sweeter to hear these six words: “Good news, you are cancer-free.”

There is a powerful ministry of presence. Twelve of us went to Kenya this past July to work and to teach, and though the labors of our hands and the words of instruction we gave were presents, the greatest gift was our presence. I wrote this in my email-journal on our last night in Nairobi: “I was reminded this week of what Paul said, that one sows, another waters, but it is God who makes things (and people) grow. And that everything we did this week, from the feeding programs, to the schools, to the VBS, to the pastors’ conference, to the church services, to the time spent with our guides on safari … we were watering. The children were thirsty for our love and our touch. Everywhere we went they wanted to hold our hands or crawl in our laps. The pastors were thirsty for teaching. These men who water others needed to be watered themselves. The schoolteachers we met were thirsty for encouragement, for someone to tell them they were doing a good job. Even the guides on safari said at least three times, ‘We love this group!’ They were watered by us as we loved on them, asked them about their faith and their families.”

Strong fathers needed: Only the serious need apply. This “word” was spoken to me over and over this year, but two times in particular this fall. First, Roche van Wyk was with us from South Africa in October. He said to me after observing the men in this fellowship who are leading their families: “That is one of the greatest needs in South Africa. Fathers who will take their responsibility seriously.” Two weeks later, Richard Sanders joined nearly 50 of us men and young men at the beach for the annual men’s retreat. He said the same thing to me about Moldova, where he serves as a missionary: One of the greatest needs in that country is fathers who will take their responsibility seriously.

I could not agree more.

J. Mark Fox is the author of “A Faithful Man”and the pastor of Antioch Community Church on Power Line Road in Elon. You can tweet him @jmarkfox and can find all of Mark’s books on Amazon or other online sellers. Email Mark at markfox@antiochchurch.cc
By Mark Fox