The world changed forever that night 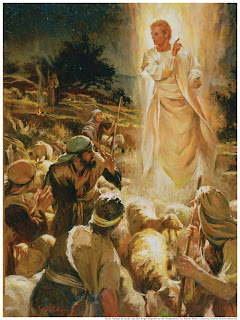 The shepherds were watching their flocks that night. That’s all. Just a normal night for a shepherd. Maybe they were glad to have sheep to watch. Maybe they were wishing they had something else to do for a living that wasn’t so cold and didn’t smell like sheep. It was quiet. And dark. Then everything changed in an instant as the sky lit up when an angel of the Lord appeared. The angel was not there. Then he was. It wasn’t like the shepherds looked way off in the distance and saw a dim light moving in their direction. Like one turned to the other and said, “Hey, Levi. What’s that coming yonder?” Levi answered, “Don’t know, Jake. But it’s headin’ this way, and I’m getting’ just a mite skeered.” No. They didn’t see the angel approaching. There was no warning whatsoever. The angel was on them in an instant. And, “The glory of the Lord shone around them.” The shepherds were not slightly amused. Or curious. Or mildly irritated. They were terrified. The pictures that men have painted of this scene over the years are almost comical. They often portray the shepherds as rough-hewn burly men, and the angels as delicate women with curls and rosy cheeks and wings. The paintings often make you wonder, who was afraid of whom? The paintings make you think the shepherds should be saying to the angel, “Don’t be afraid little lady. Us big ol’ shepherds won’t hurt you. Come on down here and don’t be shy. You can talk to strangers. It’s OK.” Again I say, no! The angel was awesome and the shepherds were terrified. “Filled with great fear,” Luke said. It was the night of nights and the appearance of an angel changed everything. Because he came with news.

The angel said, “Do not fear, for I bring you good news of great joy!” Do you see that? It is the good news that is not only the answer to all of our fears but is the source of all our joy. All our fears: gone. All our joy: now here. Who? Where? The angel answers their questions before the shepherds can ask. “For unto you is born this day in the city of David a Savior, who is Christ the Lord.” The one who is born in Bethlehem that night was Savior and Christ. You could say that is what Jesus came to do on earth: to save us from our sins as the Christ, the Anointed One, the sacrifice. But he came from heaven as Lord. The angel might as well have said, “That’s who he is. He is Lord! He made you. He made everything you see and everything you cannot see. Jesus, born in a manger, is Lord.”

And with that, the one angel was joined by a battalion of angels, and they all began to praise God. It was adulation like none the world had ever experienced, as these angels joined the chorus, exalting God for this night of nights, when the plan of salvation was revealed to a few lowly shepherds on a Judean hillside.

Here we are today. Still celebrating that first Christmas, when Jesus came as Savior, Christ, and Lord, and we were given all we would ever need.

J. Mark Fox is the author of “A Faithful Man,” and the pastor of Antioch Community Church on Power Line Road in Elon. You can tweet him @jmarkfox and can find all of Mark’s books on Amazon or other online sellers. Email Mark at markfox@antiochchurch.cc
By Mark Fox