Random thoughts on the doorstep of 2013 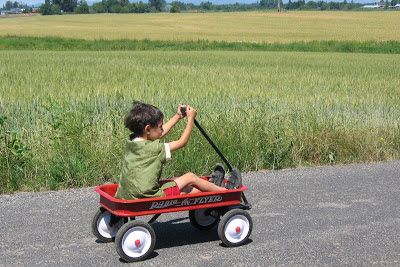 As we stand at the door of 2013, I would like to offer some random thoughts that may encourage you, make you smile or even give you a nudge in a healthy direction.

It was the day after Christmas at a church in California. Pastor Mike was looking at the Nativity scene outside when he noticed the baby Jesus was missing. He looked around in the straw, and not finding the baby there, Mike began a slow walk around the bushes nearby, wondering if someone had tossed infant Jesus there as a prank. Out of the corner of his eye, he saw a child round the corner while pulling a red wagon. In the wagon was the missing figure of the Christ child. Pastor Mike walked over and said, “Hey, Jimmy, where did you get the baby Jesus?” Jimmy pointed at the Nativity scene, “I got him from right over there.” Pastor Mike said, “And why did you take him?” With a sheepish smile, Jimmy replied, “Well, about a week before Christmas I prayed to little Lord Jesus. I told him if he would bring me a red wagon for Christmas, I would give him a ride around the block in it.”

Though our prayers get more mature as we grow in Christ, may our faith be like that of a little child.

We can learn about listening from the shepherds. I never noticed until this year, as I read the story from Luke 2 for the umpteenth time, that the shepherds on the Judean hillside did not speak until the angels had gone away into heaven. Not a mumbling word. They just listened in stunned silence. They didn’t interrupt the angel when he told them about the good news of great joy. They didn’t ask a question. They gave their ears as the one angel was joined by a battalion who cried out, “Glory to God in the highest!” The proof that the shepherds not only heard the angels, but actually listened to them, is found in their response. After the angels went away into heaven, the shepherds said to one another, “Let us now go to Bethlehem and see this thing that has happened.” These men all knew where the baby was and why he was worth leaving everything to go and see him, and it was made possible because they had listened. John Wayne used to say that most of us are short on ears and long on mouth. Stephen Covey said, “Most people do not listen with the intent to understand; they listen with the intent to reply.” James said, “Let every man be quick to hear and slow to speak.”

Listen. It’s a good thing to practice this year, and not just when angels show up.

We can also learn about worship from the shepherds. They hurried and found the manger and saw the promised Messiah with their own eyes. They left there “glorifying and praising God for all they had heard and seen.” Not only that, the shepherds’ worship did what all worship is supposed to do. It became mission. They told everyone who would listen about the angels and about the baby. It is true that Mary was the first one to “carry the Good News,” but the shepherds were the first human beings to proclaim it. Worship, seeing Christ, will always result in mission, telling his story, and telling your story as you have heard and seen for yourself that God is good. Worship Jesus. Is there anything more important for us in 2013? Have a happy and blessed new year.

Email ThisBlogThis!Share to TwitterShare to FacebookShare to Pinterest
Labels: books