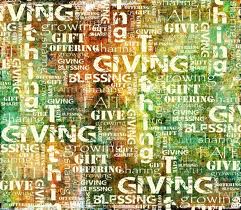 Why does the Bible instruct the followers of God to give? It is not because God needs our money. He owns everything and has no need. He even said, “If I needed anything, I wouldn’t ask you!” It is also not because the church needs it. The church does need the people who are a part of it to give, but it is sustained by God. The church I visited in the bush of northern Kenya last month has no “budget” to speak of, but its founder and its sustainer is God.

No, the reason why we are called on to give is so that we will learn to be like the giver, God himself.

Paul wrote two chapters of his second letter to the Corinthian church to urge them to give generously. The centerpiece of his argument is this: “For you know the grace of our Lord Jesus Christ, that though He was rich, yet for your sakes He became poor, that you through His poverty might become rich.”

God gave more than we could ever imagine and certainly ever repay when he gave his Son to the world as a sacrifice for sin. Will we learn to love like that through our own giving? Will we also learn to do so cheerfully? Because here’s an interesting truth from Scripture: God loves a cheerful giver.

A little girl was given a dollar and a quarter by her mom on the way to church. She was told she could put either one in the offering plate and keep the other. On the way home, the mom asked what she gave. The little girl said, “I was going to give the dollar but right before the offering, the preacher said God loves a cheerful giver, and I knew I would be a lot more cheerful if I gave the quarter.”

I don’t think that is exactly what Paul had in mind. But wait. What does that mean, “God loves a cheerful giver?” God loves everybody, right? So why did Paul say this? I was praying about that last week, and my mind went to Jesus’ words, “true worshippers will worship the Father in spirit and truth: for the Father is seeking such to worship Him.” God seeks those who worship him in spirit and truth. God loves a cheerful giver. If God seeks worshippers, I want to be found by him doing just that. If God loves cheerful givers, I want to be loved by him doing just that. That will require faith.

Giving is an act of faith in God’s abundant provision. This is why most give sparsely or not at all. If they were able to be honest about it, they would have to say, “I am afraid if I do this, I will not have enough.”

A pastor had this conversation with one of his members who happened to be a farmer. “Brother Bill,” he said, “If you had $1,000, would you give the church $500?” Bill said, “You know I would, pastor.” Then, the pastor said, “If you had two pigs, would you give the church one of them?” Bill replied, “That’s not fair, pastor! You know I have two pigs!”

It’s easy to sing “Take My Life and Let it Be,” and even the verse that says, “Take my silver and my gold, not a mite would I withhold …” but it is much harder to live that song. It requires faith. And obedience.
How about you? Are you learning to love like God does through faithful and cheerful giving?