Jesus loves the Samburu of Kenya

We drove down the dirt road for 10 minutes and stopped at the edge of the trees. Climbing out of the Land Cruiser, the 12 of us peered into the darkness, wondering how far into the woods we would go. A few of us had flashlights, and they swung with every stride, their nervous movement matching our uncertain steps. One of the men whispered to me, “We are being led into a place we don’t know by warriors. Warriors we’ve just met a few hours ago.” I nodded, my mind playing with the thought that we really didn’t know what we were getting ourselves into. After a five-minute walk, we came to a clearing. We followed our guides a few more yards and stood there, not sure what would happen next, awed by the eerie quietness and darkness that enveloped us. 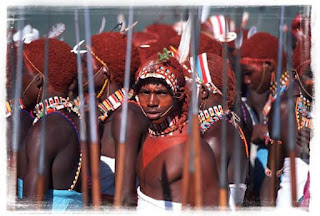 They came from the bushes. We could not see them. They carried no lights, and their dark clothing and ebony skin kept them hidden. Standing in a semi-circle in front of us, the men, women and children waited for the leader to speak. He greeted them in their language and invited one of the women to begin a song. She sang out in a loud, clear voice, and was answered by all the members of the tribe standing around her. They sang like this, call and response, for more than 10 minutes, in a language that itself is melodic. We tried to sing with them, picking up phrases that were repeated, and jumping with them as they sang. When the songs were done, the leader introduced our team and asked our leader to give a greeting. Scott spoke a sentence at a time in English, waiting for our guide to translate each one. He thanked them for coming out to meet with us and then introduced me.

The Samburu people of Kenya are a tribe of shepherds who keep cows, mainly, but also sheep, goats and camels. Like their close kin, the Maasai, the Samburu believe that all the cattle on earth belong to them. They live in round huts made of sticks, mud and cow dung, in groups of five to 10 families. Since most of the Samburu cannot read, they learn through storytelling. This is why they had gathered on a Wednesday night with a group of 12 American Christians: They had come to worship God and hear his stories.

I stepped up and began to speak about the God I know through the person of Jesus Christ. I told them the story from Luke 13, where Jesus called a woman out of the crowd at the synagogue. She had been bent over for 18 years, unable to stand up straight. He told her that the bondage she suffered was now broken. This was likely a woman that everyone knew, but nobody noticed. They passed her on the way in, but she stayed outside, marginalized by her infirmity. Until the day that Jesus came.

I told the Samburu that Jesus laid his hands on her, and “immediately she was made straight, and glorified God.” That is the Gospel, I told them. Jesus saw her when she could not raise herself to look at him. Jesus called her, spoke the word to her, touched her and made her a new person. “He can do the same for you.”

We stood in the dark with tribesmen and women 8,000 miles away to proclaim that the light of the world is Jesus Christ. He loved the woman who was bound by sin. He loves the Samburu just as much.
By Mark Fox

Thanks for that post! I had the privilege of serving in Kenya for 2 years and continue to miss it many times--especially the people. Can't wait to be reunited with them in Heaven someday! God Bless!

Thank, Debbie. Yes, I think part of my heart is Kenyan now. This was my tenth trip there, and my seventh opportunity to do a pastors' conference. Can't wait to go back, Lord willing!