Did Jesus ever claim to be God?

Forget the prophecies. Forget the voice of God from heaven. Forget the miracles. Forget even rising from the dead. Amazingly, all of these can be (and have been) written off by skeptics as insufficient evidence for the divinity of Jesus. According to many doubters, the most compelling evidence would be in Jesus' own words. Did Jesus ever claim to be God? Skeptics have argued in the negative. 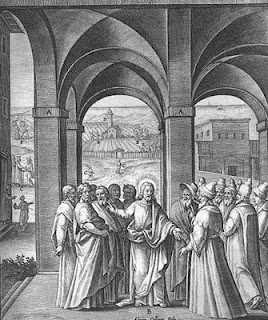 However, the assessment and judgment of many first century Jews makes a different argument. And I'm not talking about the Jews who did believe Jesus was God (the disciples), although that is an argument in itself. No, I am speaking of the first century Jews who didn't believe Jesus was God. The Jews (and the Pharisees in particular) responded with charges of blasphemy, with violence and murderous intent, at the claims of Jesus. The Pharisees' response towards the words of Jesus—and the fact that Jesus never said, "Wait, that's not what I meant"—seem as compelling as any other proof that Jesus claimed to be God. Consider:


And behold, some people brought to him a paralytic, lying on a bed. And when Jesus saw their faith, he said to the paralytic, “Take heart, my son; your sins are forgiven.” And behold, some of the scribes said to themselves, “This man is blaspheming.” But Jesus, knowing their thoughts, said, “Why do you think evil in your hearts? For which is easier, to say, ‘Your sins are forgiven,’ or to say, ‘Rise and walk’? But that you may know that the Son of Man has authority on earth to forgive sins”—he then said to the paralytic—“Rise, pick up your bed and go home.”(Matthew 9:2-6 ESV)

Again the high priest asked him, “Are you the Christ, the Son of the Blessed?” And Jesus said, “I am, and you will see the Son of Man seated at the right hand of Power, and coming with the clouds of heaven.” And the high priest tore his garments and said, “What further witnesses do we need? You have heard his blasphemy. What is your decision?” And they all condemned him as deserving death.
(Mark 14:53-64 ESV)

Your father Abraham rejoiced that he would see my day. He saw it and was glad.” So the Jews said to him, “You are not yet fifty years old, and have you seen Abraham?” Jesus said to them, “Truly, truly, I say to you, before Abraham was, I am.” So they picked up stones to throw at him, but Jesus hid himself and went out of the temple.
(John 8:56-59 ESV)

The Jews picked up stones again to stone him. Jesus answered them, “I have shown you many good works from the Father; for which of them are you going to stone me?” The Jews answered him, “It is not for a good work that we are going to stone you but for blasphemy, because you, being a man, make yourself God.”
(John 10:31-33 ESV)

Feedback: Is this a compelling argument to you? What is the strongest argument in your mind regarding the divinity of Jesus?
By Jared Totten

Yes, these (and others) are weighty and significant claims made by Jesus. -- But many people make claims: Indeed, every day hundreds of deranged people claim to be "God" or "Christ," and thousands of New Age practitioners and Hindu gurus claim to be God, but there is no power behind those claims. -- But Christ is different. In Rom. 1:4 Paul says Jesus Christ "was declared with power to be the Son of God by his resurrection from the dead: Jesus Christ our Lord." -- This is the unique and exceptional power behind all the claims, teachings and deeds of Jesus Christ: the resurrection. This is the linchpin that gives all of Christ's ministry credibility (that is, until his second coming and the judgment). - - Blessings to all. - Rhett T.