Coming from a strategic planning background in advertising, Shane Hipps has a unique and valuable perspective on the issue of media and ministry. This unique perspective enables Hipps to present a challenging and at times controversial approach to understanding media and its impact. 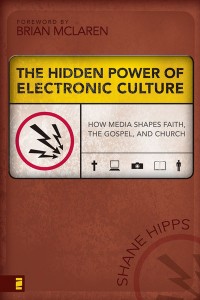 Before being exposed to this book, I had always embraced the truism that “the methods can change as long as the message stays the same.” Hipps successfully tears down that idea and replaces it with the McLuhan-esque thought that “The media is the message.” For many years Hipps was a successful advertising executive who utilized media to demonstrate to people that what they were truly missing in their life was his product. As he grew in his faith, he realized that he was filling the void people felt in their life with false deliverers. Desiring to be obedient to God, he left his successful career and attended seminary so that he might deliver the correct message.

Hipps turns his eye to how our world and perceptions are significantly shaped not by the message, but by the media that carries the message. The first half of his book demonstrates this truth convincingly. This is where the value of the book truly is. Eye-opening and sobering, we can see how we have inadvertently altered or watered down the message of the gospel by utilizing media ineffectively.

Hipps systematically walks through the development of technology in communication. He demonstrates his point by discussing the printing press, the telegraph, the radio, and the photograph. Through these technologies we can see how western thought has evolved. Authority has been displaced, the individual is exalted, and we now live in a graphic culture. Through his analysis, Hipps clearly demonstrates the hidden power of electronic culture, and why we should care.

The second half of the book is sadly lacking in regards to our response. Hipps attempts to rescue Christianity from the rubble of modernity without sacrificing truth at the altar of post-modernity. Unfortunately, he starts down a potentially dangerous road in his proposed applications. For example, he spends some time talking about “God’s chosen media.” For Hipps, God’s chosen media is the church, and the people within. Although I can see an element of truth in this statement, it misses the mark. God’s chosen media is His word as given to us in Scripture and His general revelation of which the church is a part. The church is his tool, but it is (sadly) deeply flawed. The church is made up of fallen people with questionable motives, sinful natures and slanted theological filters. As such, it is an inconsistent and unreliable source and should not be considered “God’s chosen media” par excellence as proposed by Hipps.

He poses several nascent ideas but does not explore them with any depth, ultimately leaving us with more questions than answers. The Hidden Power of Electronic Culture is a must read. But it must be read with discernment, prayer, and humility. The world is changing. Media does have a very real impact on the message. How can we embrace the tools at our disposal without compromising the message? This book is a valuable tool in the kit, but it is not the cure.
By Sten-Erik