The Gospel and Lent: A Reformer's Reasoning 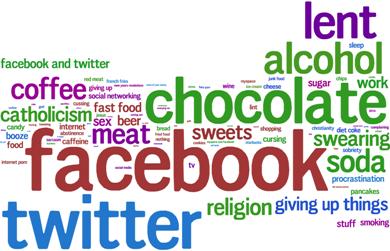 This year will mark the third year that my church (Southern Baptist if you must know) has observed the Lenten season together. While I don't even pretend to know all the historical context (nor will I address any of it), I would like to offer what I feel is a healthy use of the Lenten season that keeps the emphasis of our faith on grace and the gospel and away from self-righteousness and moralism.

In its simplest form, Lent is a time of preparation for remembering and celebrating the death, burial and resurrection of Jesus Christ around the Easter season. Often this is done through some sort of self-denial as a means of reminding us of our dependence on God and our need to connect with him through prayer and the Word. Jesus himself modeled this sort of self-denial when he, though utterly drained after days full of teaching and miracles, often chose to spend his nights in fervent prayer to the Father rather than in sleep. There are two simple guidelines that my church uses when picking something to fast from:

1. Pick something that is good or amoral (morally neutral) from which to fast. As Timothy pointed out in an earlier post, Lent is misused—if not abused—when used as an excuse to give up something temporarily that we should really be giving up permanently. Tim is right, it doesn't go deep enough in killing our sin. If I may use two fifty-cent theological terms, I would suggest that Lent is more about sanctification and only about mortification as a by-product. Fasting from something isn't an end in itself (like trying to stop a certain sin). Rather it is a means of reminding us of our dependence on and submission to God the Father and of identifying with Jesus in his humble incarnation. Fasting, then, is a tool to make additional space in your life for devoted time to prayer and the Word.

Jesus wasn't against fasting in principle, only when used as a means of grandstanding. Jesus modeled this for us as he fasted from food (during his temptation in the desert) and sleep (as previously mentioned). He also gave instructions to his followers as to how to fast (Matt. 6:16-18) and assumed that his followers would fast after "the bridegroom is taken away from them" (Matt. 9:14,15). The early church fasted from food (Acts 13:2,3 and 14:23) and Paul's only allowance for a married couple to stop having sex was for a sex fast (1 Cor. 7:5). If that doesn't change your perception of the word "fast", I don't know what will.

2. Pick something in your daily routine from which to fast. A fast doesn't have to be just from food (as I'm sure you've already gathered). But food is a very effective fast because your body will remind you when you are missing a meal. However, there are other equally effective fasts that will bring a daily reminder to dependence, submission, prayer and the Word. Just have a peek at the Word Cloud above and you'll see something there that you use daily but could live without. As a personal example, I am giving up all music and podcasts when I am alone in my car (this is probably a bigger deal for me than some others). So I am either driving in silence and praying or listening to my Bible on mp3. Fasting, then, is also a tool to give daily reminders for devoted time to prayer and the Word.

And here's where grace and the gospel comes home. My church takes every Sunday off during Lent. So I get to rock out to tunes on my way to church. Someone else finally gets that cup (or five) of coffee that they've been craving and head-aching for all week. Every Sabbath leading up to Easter is a mini-celebration that we are no longer under dietary laws—and The Law in the larger sense. Lent fasting is for prayer and submission and dependence, but we will always and only do these imperfectly. So each Sabbath of Lent—but especially Easter—is a celebration of the fact that our right stand does not depend on a fast (and its success or failure). It does not depend on how well or how long we pray. It depends solely on the One who fed himself and depended on prayer and the Word throughout his faultless life. It rests completely on the One who submitted to being emptied, being a servant, being humbled, and being crucified. My righteousness rests in the fasting of another, the dependence of another, the submission of another, the prayers of another.

Fasting isn't an end in itself (if it is, then it's just dieting). But when we willfully give up something good in order to learn greater dependence on and submission to God through prayer and the Word, then our very discipline reflects and identifies with Christ in his humble incarnation and celebrates Christ in his perfect substitution. I can hardly think of a better preparation for Easter.

The last to paragraphs are gold.

It is about the gospel.

John Calvin said something to the effect that the heart of the Christian life is self-denial. It's a message that modern day evangelicalism needs to hear all while we remember that the one who was truly heard because of his piety (Heb. 5:7) is the one by whose merits we stand.