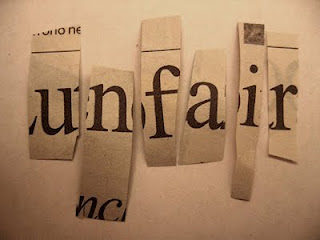 The following is an email I sent to my Community Group recently in response to some tensions being felt as we studied the historical books in our Old Testament Challenge:

God has seemed "unfair" in the ways that he deals with mankind (especially in how he judges and even takes life in the Old Testament), so that some are getting a strong sense that God is capricious and arbitrary. However, I think the crux of the problem we're feeling is in the way we define "fair", and this causes us to have expectations of God's character that the Bible doesn't support (and honestly, we wouldn't want).

"Fair" is an unhelpful word to use when talking about God because it's got a broad spectrum of meanings. Usually people use it in two different ways, fair meaning just or fair meaning even (everything's equal and uniform).

But if God were even and uniform with all humanity, there's really only two options: either everyone gets justice and dies at their first sin and goes to hell (actually, humanity would cease to exist with Adam and Eve), or everyone gets grace and God deals no consequences in this life or afterlife and everyone goes to heaven. (Neither are biblical and neither sound like a preferable alternative to me).

So God is not fair, if by fair we mean identic and uniform. If we expect this from God, this is our own preconceived expectation of God, not one the Bible gives (and not a desirable one, if you ask me).

God is also gracious and merciful, which is why nobody dies at the moment of their first sin (and most people don't die by the hand of God for a sin later in life). Yes, God gives more grace to some than others, but grace by definition is a freely given gift, not an obligation. If God were obligated to deal out grace uniformly and identically, it would no longer be grace. And I always like to point out, whether you get justice or grace from God, no one receives injustice.

So yes, God deals with grace in some situations, and justice in others. Both are good and true attributes of God that work in harmony with—not conflict of—each other (that's a whole other discussion if you want to have it some time). "But isn't a sometimes just and sometimes gracious God capricious? Fickle? Whimsical?" The only way we can really make this charge is if we assume that we understand these seemingly similar biblical accounts better than God does all the way down to the heart- and motive-level. We should be humble enough to admit that we can't read hearts or minds or motives, and when God seems to be acting differently on different occasions there are a whole host of factors that we aren't privy to. And yes, God gives grace for a time to the Israelites before finally bringing the judgment he threatened, but grace for a time leading to eventual judgment is a common theme throughout the Bible that both the Israelites and the Canaanites got. So again, God is consistent with his own character here and anything but capricious.