Book Review: From the Garden to the City by John Dyer 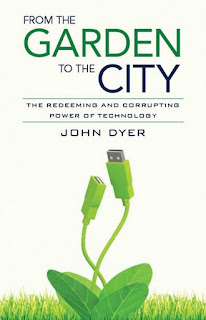 At the risk of sharing details that no one is interested in, the books that I review are always and only sent to me from publishers upon my request. So when Kregel Publications sent me two books unsolicited, I was certain there had been some sort of mistake. Only after contacting Kregel did I find there had been no error. Rather, Kregel is so excited and confident in their products, they decided to send them out to prior reviewers. Initially I was slow to pick up the books since I felt no obligation towards them, but in the end I caved...and am happy I did so.

As a former communications major at a Christian university, I've read a number of books addressing the intersection of technology and Christianity. These "theology of technology" books have almost always proven to be heavier on the technology side than the theology side. The authors, likewise, have more often proven to be students of Marshall McLuhan (a major figure in media theory) than students of the Word.

But that all changed as I read this latest book by John Dyer (ThM, Dallas Theological Seminary). From the Garden to the City has a biblical balance and insight to it that has been missing in all my previous reads. Dyer shows an uncanny ability to skillfully and faithfully weave the two seeming unrelated topics of faith and technology into quite an engaging book.

The very structure of the book follows the Christian metanarrative of creation, fall, redemption, and restoration. Dyer argues that (1) our ability to make technology is a reflection of our Creator, (2) every technology has the potential to be used for sin and rebellion, (3) technology can also be used for redemptive purposes, and (4) God's plan is the restoration of all things, including some of the things we make. Here's a thread of insights I felt made a significant connection:

Adam and Eve's very first act after sinning simultaneously reflected their programming as God's image-bearers, and their newfound sinfulness...
The clothing was their way of transforming their circumstances such that they would no longer rely on God for anything...
Technology can at the same time be both a reflection of the image of God and a subtle rebellion against him and his authority...
...technology is also one of the chief means by which humans attempt to create a world without God. As our technology grows more and more powerful, the illusion of control becomes increasingly convincing. (Chapter 5, "Rebellion")

Dyer does a masterful job of helping the Christian reflect on the nature of technology. If I have one critique, it is that there was not equal emphasis on how the Christian should respond to technology. Or put another way, at the cross-section of theology and technology Dyer gives us plenty of implications but not enough applications. (Perhaps a second book is in order?)

Living in the middle of a technological explosion (comparing the last 150 years with the span of human history), we should be all the more diligent in examining and "seeing through" the technology we use. Dyer warns, "When technology has distracted us to the point that we no longer examine it, it gains the greatest opportunity to enslave us."

This book was a free review copy provided by Kregel Publications.
By Jared Totten