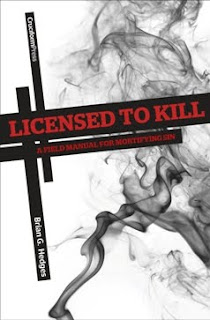 Back in 1656, Puritan author John Owen wrote a gospel-saturated attack on human depravity called The Mortification of Sin. Over three centuries later, Brian Hedges has written a book that echoes the heart of John Owen to a modern generation.

Like a surgical strike, Licensed to Kill outlines the powerful barrage available against indwelling sin in the life of the believer. With succinct chapters and "Examine and Apply" questions, this book perfectly fits its subtitle as a field manual for mortifying sin:

"It is in the nature of sin to pursue its course little by little, to the very end. Every intentional indulgence of lust would become adultery if it could."

Destined to draw comparisons to Owen's The Mortification of Sin, Hedges wears his influences on his sleeve quoting Owen early and often (yes, even the mandatory Owen quote: "Be killing sin or it will be killing you"). This, however, is not a criticism of the book. It reads like a fresh, modern repackaging for a generation that doesn't have a Puritan patience.

This little book may very well be "The Art of Spiritual War" for the modern Christian. Highly recommended. (Oh, and before anyone gets too impressed, The Mortification of Sin is the only book by Owen I've read.)

Recommended for: Any Christian struggling with sin in their lives

This book was a free review copy provided by Cruciform Press.
By Jared Totten