Book Review: If God, Why Evil? by Norman Geisler 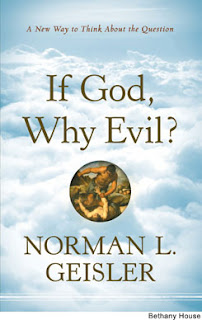 Last week I began a two-part series of book reviews addressing the problem of evil. Even with the common subject matter, If God is Good . . . by Randy Alcorn and If God, Why Evil? by Norman L. Geisler could not be less alike in their approach. Here's the breakdown of the two books (denoted as IGIG and IGWE:

IGIG is a beast at almost a half century of pages (494 to be exact). IGWE, before the appendices, is a mere 122 pages.

IGIG is accessible, pastoral and an easy read. IGWE is more academic, even to the point of stating the various problems in proper logical argument form.

As Geisler writes in the introduction, "At the same time our heart needs comfort, our head needs answers". Just such answers are the focus here. If God, Why Evil? by Norm Geisler is a sharp, intellectual stab at the heart of one of Christianity's most vexing questions (and yes, that question just happens to be the title). While the book is brief, Geisler brings all his apologetic weight to bear and the result is a pleasure to read.

This book is not for those struggling with evil and pain on a deep personal level. For such, this will feel too academic, too sterile. However, for those struggling with Christianity because of the intellectual objection surrounding God and evil, I cannot think of a book I would recommend more highly. It's smart and brief. It will take a few hours to read but a few weeks to digest.

While I think the brevity of the book is a great selling point, I think the publisher was a little worried about it. I merely say that because there are a couple appendices tacked on the end that seem only loosely related. Titles like "Animal Death Before Adam" and "A Critique of The Shack" should prove my point.

All in all, this is a solid book. Oh yeah, and it has my daughter's endorsement as well!

Recommended for: Apologists, those questioning Christianity

This book was a free review copy provided by Bethany House.