The Reason for the Season 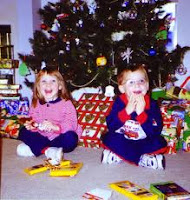 Thinking back on my childhood, I can still remember the excitement and anticipation that I felt leading up to Christmas. It was almost like a dull vibration that went humming through my body giving me a constant sense of advent. Of course, it was the advent of Christmas morning and presents that I was feeling, not the more spiritual Advent you're thinking of.

I still remember the year that I began to care a little less about the presents. I remember telling my mom so and saying that I was understanding and appreciating more the "real reason for the season". And since that year, there has been a continual progression as the presents are less and less a part of my Advent excitement. And this year I am beginning to wonder if that's such a good thing.

Don't get me wrong. I believe Jesus is the reason for the season. But I think we're losing something when we try so hard to get away from the childhood fixation on gifts, because at the heart of the incarnation is one act of God after another that is each fundamentally and profoundly a gift.

After all, I don't think most adults appreciate the real reason for the season any better than kids do. When it comes to Christmas gifts, children are quite materialistic. They're excited about getting stuff. Adults, on the other hand aren't less excited because they're less materialistic but rather because they can get all that stuff for themselves. If you were anything like me, you started caring less about the Christmas gifts around the same time you started earning your own money and buying all the stuff you wanted throughout the year. So we're not less materialistic than we used to be, we're not more in tune with the real reason for the season than we used to be, we're just more capable of meeting all our own wants and needs during the year.

Kids, on the other hand, wait for months in anticipation of the promised and coming gifts. They know that if they aren't given what they want or need, they are completely helpless to get it on their own. Someone else must earn and pay for their gift. And what shows the Gospel and Advent better than gifts given to even the undeserving and ill-deserving children? In my childhood and materialistic mind, I was thinking in very simple terms "Despite how I've behaved this year, the gift under the tree is what I want, what I need, and if it's not given to me, I am utterly out in the dark to earn it for myself".

The gift of Jesus in incarnation—his advent, his life, death, and resurrection—are, as Tim Keller might say, the true and better Christmas gift. It fulfills promises and great anticipation. It is given to those undeserving and ill-deserving. It meets our most fundamental needs. It satisfies our deepest desires. It cannot be earned. It cannot be bought. It cannot be merited by good behavior.

I'm suggesting that when we lose that gift-excitement around the Christmas season, we're actually losing something that is a perfect picture of the Gospel and Advent. Instead of making it less about the gifts perhaps we should consider how we, for children and adults alike, might take the excitement and anticipation of the gifts and channel them toward the true Gift.
By Jared Totten

Very good thoughts, Jared. - We meditate on God's marvelous gift. And there are more to come, because he is boundless in creativity and love. - Papa R