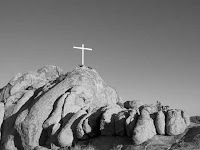 You may have noticed that original content at CiC has been a bit scant of late. Jared has been holding things down with his book reviews, and most weekends have a C. S. Lewis quote and/or a links post, but other than that, well, there hasn't been a ton to say.

There are a number of reasons for this. Lack of time is near the top. Some of us have been especially busy of late, and though we enjoy blogging, it tends to fall to the bottom of our priority lists. Perhaps just as important, two years into CiC's life it is often difficult to come up with new content. There's only so much about the church we can all keep complaining about...

I'm joking, of course, but those of you who read many Christian blogs know that I don't have to be. "Christian blogging" is too often synonymous with "Christians endlessly pontificating about what other Christians are doing wrong." I'll suggest that CiC is at its worst when this is the majority of its content- I know because I have too often reverted to needless critique when I have nothing else to say.

With all this in mind, the CiC team has come to the consensus that Christian blogging isn't worth doing if it isn't edifying to its readers- "isn't worth doing" in the sense that we don't want to waste our time or yours. So we've come up with a plan: themed months. For at least June (and probably for the whole summer), CiC will have a monthly theme that most of our content will revolve around. Hopefully this gives us not only fodder for writing in general, but focus for content that is edifying to Christians at all stages of faith.

So for June, we've decided to start by majoring on the majors: this month's theme is the cross (thus Damian's nifty addition to the banner at the top of the page). We know that's broad, but that is purposeful since we haven't done this before and want to allow some wiggle room. My hope is that we'll have a wide range of content, including original articles, interviews with people we respect who have done a lot of thinking on this topic, the usual links and quotes, and possibly some audio and video related to theme. I also know that Jared has it in mind to focus at least some of his reviews on books about the cross. We don't know exactly how it will all work, but hopefully we'll all figure it out. Also, regular, non-cross-related blogging will probably still show up in some measure. The idea is to focus us, but not to be unnecessarily rigid. If one of us has something to say, we'll say it.

So today marks what could be an overhaul in the way CiC operates from here on out. Or it could just be the beginning of a failed idea. In any case, we'd be glad for your feedback, and we hope that this little blog glorifies God by edifying Christians.
By Andrew Faris

Email ThisBlogThis!Share to TwitterShare to FacebookShare to Pinterest
Labels: Christians in Context

Hey Guys! I read your blog every day!!!
Thanks for all the awesome wisdom you share!!

Can you guys do me a favor? My youth group is in a national contest to win an endowment. We made a video and we need votes! To vote go to

http://www.ymilive.org
Register as a supporter
and vote for Dan and Jeff's Road to Redemption (the first video on the videos page)
If you could vote, that would be amazing!