Obama and the Black Psyche

Evangelicals never miss an opportunity to be outraged about something, but we do often miss opportunities to rejoice. That is quite sad. Here's something to rejoice over today:

The number of blacks in this country that are optimistic about their place in society has nearly doubled since before Barack Obama came into office, even though the honeymoon is certainly over by this time. You can read about the poll here or listen to an NPR segment here.

This is something that whites (and for God's sake, white Christians!) should be happy about. It doesn't mean that we rest on our laurels (as if we had any), but it should bring us some joy and some relative measure of hope.

One of the most powerful human capacities, gained through analogy or imagination, is empathy. One component of loving your neighbor is empathizing with them. It is a shame for us as Christians when we fail to empathize with the oppressed.

I remember when I got just an inkling of what Obama could mean for the black psyche. I was driving through one of the most impoverished mostly-black areas of Los Angeles (many whites who live within half an hour or so have never even been) when I saw a huge billboard that looked like this: 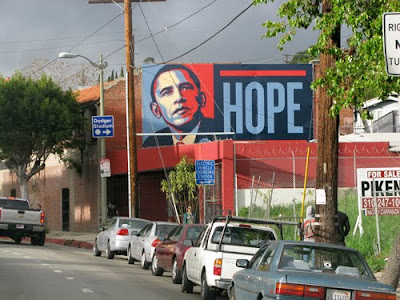 (This was, understandably, different from the posters that I had seen in my more suburban context; it was wise of the campaign to keep these Che Guevara-esque posters out of my part of town!)

It was this event (which was a series of events and relationships, really) that brought me into touch just a tiny bit with the meaning that the election of a black president could have for people's souls. I rejoice today knowing that it has done at least something to make some of my fellow humans feel that they are taken seriously as such.