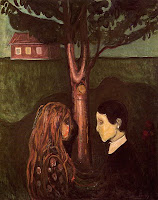 I'm currently reading through the Church Dogmatics III.2, Barth's theological anthropology. It has been incredibly edifying (as KB nearly always is). I came across a wonderful little snippet in one of the many excurses and thought I would pass it along. Barth has already at this point established Christology as the basis of anthropology and has now moved from analyzing the humanity of Jesus to explicating how it is that other humans share in this same humanity. Humanity's "basic form" is that of a being in encounter with it's fellow humans. The statement "I am" that man can utter has an immanent "Thou art" embedded within it. One of the ways Barth fleshes out the encounter with his fellow men in which man has his being is by saying that "Being in encounter is a being in which one man looks another man in the eye" (250). Why this as the epitome of man's encounter? Because it is here that man must both see and be seen. Without being consumed by one another, both men are open for one another. There is a sense of both men giving themselves to one another in the encounter. Barth says:

"It is a great and solemn and incomparable moment when two men look themselves in the eye and discover one another. This moment, this mutual look, is in some sense the root-formation of all humanity without which the rest is impossible. But it is to be noted again that in the strict sense it can take place only in duality, as I and Thou look one another in the eye" (251-252).

Not all participation of human beings has this character of eye-to-eye encounter. There is an interaction in which man is not open to his fellow man. What is it?

"Bureaucracy is the form in which man participates with his fellows when this first step into mutual openness is not taken, and not taken because duality is evaded for the sake of the simplicity of a general consideration and a general programme. Bureaucracy is the encounter of the blind with those whom they treat as blind. A bureau is a place where men are grouped in certain classes and treated, dismissed or doctored according to specified plans, principles and regulations....A bureau does not have to be an office. Many a man unwittingly sits and acts all his life in a private bureau from which he considers how to treat and dismiss men according to his private plans, and in the process he may never see the real men and always be invisible to them" (252).

We all know too well the public bureau that is some type of a necessary evil in which we are treated as part of a general class and perhaps dismissed as such. We also know too well the tendency in ourselves or others to "consider how to treat and dismiss men...according to [our] private plans." When we do this we treat our fellow humans as objects and not a genuine Thou who is an I like us. In doing so, we fail to live as humans, according to Barth, and are actually scarily similar to the depiction of Nietzsche given just a few pages prior (231-242). He who has eyes to see, let him see.

(Pardon all the gender-biased language. It's hard to break free after just reading heaps of Barth).