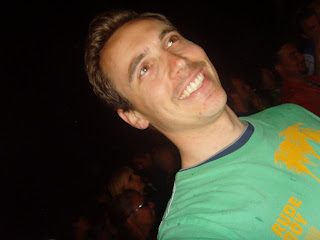 As the newest member of the CiC team and the first international member, I thought it appropriate that I say a few words by way of introduction. In case you're wondering how it is a Brit (well, an Englishman anyway; I'll probably never explain the difference) comes to be on the team, well, I owe a great debt of gratitude to Ian, one of my great friends in Edinburgh and at our church Charlotte Chapel. The photo is poor but it's all I have at the minute (but there is a great story behind it).

By way of biography I am a doctor living and working in Edinburgh, UK but originally hail from Oxford. I trained in Edinburgh gaining a BSc in Neuroscience in 2004 and finally my medical degrees in 2007. Since then I have been working for the National Health Service (NHS) and have specialised into internal medicine and intend to head into neurology in about 18 months time. I was raised in a loving atheist family, but was called by God seven years ago (almost exactly). Honestly, I have struggled with faith at various times along my pilgrimage, but God in His eternal grace continues to guide and direct me towards the image of His Son. I started out with a many rough edges, which are gradually been hewn from me into some semblance of spiritual stability. What stage I am at in this I am not sure, but Christ calls me to continue forging ahead regardless. What I do know is that I love God, Jesus, the Spirit and the Bible.
My interests are largely unsurprising: neuroscience, neurology, apologetics and mind-brain issues. God-willing I will eventually head into part-time academia with research into perception and cognition and aspects of personhood and consciousness. I am, in effect, a frustrated scientist at heart, but it has given me direction for future ministry and I'll briefly explain why.
In the early days of my faith I was concerned with the intellectual consequences of belief in Christ. I was scared by quotes such as:
"Why is God considered an explanation for anything? It's not - it's a failure to expain, a shrug of the shoulders, an 'I dunno' dressed up in spirituality and ritual..." Quoted from "The God Delusion" by Richard Dawkins (pg 161).
I was scared by the big bad wolf. There was a strange tension in my belief - I was torn between sheer joy in the forgiveness of sins and the merciful grace of God, but yet I was uneasy. It felt that years of academic striving would cease and that despite the joy of forgiveness I would never fulfill my meagre intellectual ambitions or desires. Unfortunately, there was some pride in this - the almost Greek tragedy-esque example of a man giving up everything he may achieve for love. After all who wouldn't want to be Hector? God, however, does not demand intellectual impoverishment - no He drives us towards the full knowledge of Himself through science. I stand full square beneath the theological giants (always wary of idolatry) of Alister McGrath, John Lennox, John Stott and more latterly John Wyatt. These men have greatly shaped my view of science and theology and what we may achieve through it.
Furthermore, the men referenced above galvanised my faith - or rather God did it through them - and helped me grow in my love for God. Here were men steadfast in their faith in God, yet developed cogent, powerful reasons for God and His existence and how science does not lead us away from God. Moreover, it gave me the bravery and strength to confess 'ABBA Father'. In Christ we have no foes and no fears. That been said, as helpful as other brothers and sisters are for our walk with Christ, God Himself does not leave us ill-equipped. I'll conclude my ramblings with the verse that strengthens me day-to-day:

"What has been is what will be, and what has been done is what will be done, and there is nothing new under the sun." Ecclesiastes 1:9.
There is no question we can ask that God cannot answer. There is no greater encouragement than that. I thank you brothers and sisters for joining me on this journey. Praise and glory be His forever and ever.
By Tom Miller

Tom Miller
Born in England and raised as an expatriate I came to faith at age 20. Studied at the University of Edinburgh and currently work in Edinburgh as a doctor. I am involved in the student ministry at Charlotte Chapel in Edinburgh.

Good to have you, Tom.

On that slip of the key stroke, however, you can expect from me a severe challenging. Through science, a full knowledge of God, eh? Err....

Welcome Tom! God to have you with us. I'm looking forward to some good discussion!

Ian, your comment gives me an image of Barth yelling at Brunner 'Nein!' :)

Apparently there is a good looking young man who writes for you now, who not only performs brain surgery, but also loves Jesus and blogging. Oh, and he works for NHS. I think I have fallen in love.

Left it in there just for you. Glad to see you're reading it properly...