Book Review: Jonathan Edwards and the Ministry of the Word by Douglas Sweeney 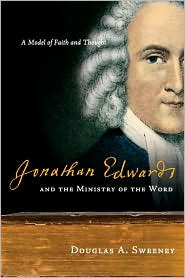 If you can't judge a book by its cover, perhaps you can by its subtitle. At least such is the case with Douglas Sweeney's new Edwards biography, Jonathan Edwards and the Ministry of the Word: A Model of Faith and Thought. I went into this book expecting detailed discussion of Edwards' use of Scripture in pastoral ministry, and I did get some of that. What I got was hagiography-as-spiritual-teaching. Sweeney's biography is a short (200 pages of 1.5 spaced font with lots of skimmable footnotes), readable introduction to Edwards' life and thought aimed at Christians who want to learn from "the greatest American theologian".

Insofar as this was Sweeney's goal, it was well-accomplished. After laboring through Marsden's authoritative tome, I breezed through Sweeney's work in a couple days- this from someone who reads with painful slothfulness. For that matter, Marsden's endorsement of Sweeney's book is proof-positive that it is at the very least a faithful treatment, as is Kenneth Minkema's.

And why shouldn't they endorse it? The biography covers each major portion of Edwards' life with brevity and clarity. Perhaps more impressive is Sweeney's remarkably lucid summary of some of Edwards' most important works (including Freedom of the Will and The End for Which God Created the World, et. al.) in the course of one short chapter. Further, each portion of the book is laced with extensive quotations from Edwards himself, so much so that I wonder if I have read more of Edwards' own writing in Sweeney or in Marsden, despite the latter's far greater length. The reader walks away with a real sense of Edwards' writing and preaching, and hopefully a hunger for more.

Still, even in a biography so consciously aimed at Christians, must we never critique the subject? So for example, Sweeney of course admits that Edwards owned slaves, but he does so with almost pitiful apology- as if Edwards was an older brother and Sweeney heard someone making fun of him. Or take his discussion of Edwards' removal from his Northampton pastorate, where Sweeney refrains from criticizing any of Edwards' actions. The closest he comes is this conclusion:

The Great Awakening proved divisive. But it also crystallized the crucial importance of conversion and of living life with eschatological urgency. Whatever one thinks of his personality or his ministerial methods, Edwards' genius for conveying these priorities was great. As we will see further below, moreover, his courage in living them out was greater.

One wonders what the author in fact does "think of his personality or his ministerial methods". Was Jonathan Edwards really all genius and courage?

Sweeney's biography will be useful to the Christian who wants an introduction to the life of Edwards. He finishes the work with seven theses that seek to apply Edwards' model to modern church life, and these may actually be the most helpful part of the book. Even if more focus on Edwards' "ministry of the word" (the title really did mislead me in this regard) and balanced assessment of Edwards the man would help, I would still be glad to pass this book along to the Christian wanting to learn from Edwards. For my part, I hope that more Christians will seek to do just that.


NB: This book was given to me for review by InterVarsity Press free of charge.
By Andrew Faris