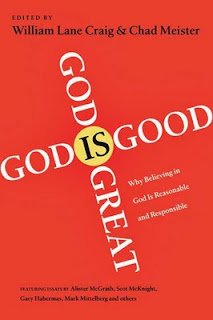 The New Atheists have been getting a lot of attention lately; first from the general public because of their writings, and then from the Christian community because of the general public's interest. And just as the ideas of the Dawkins, Harris, Hitchens and Dennett have spawned several books, so the rebuttals of Christian academia have also been the fodder for many publications in the last year or so.

God Is Great, God Is Good is one of the finest examples of this mini-genre and it brings together some of the sharpest minds in Christian apologetics. Names like Michael Behe, Gary Habermas, and William Lane Craig offer their best defense for Christianity against the charges of the New Atheists. The diversity of authors in this book is perhaps both its greatest strength and its greatest weakness: strength because each author can focus on their respective field, and weakness because there is a noticeable absence of a clear train of thought from one chapter to the next.

While the flow of a single-author sort of book is missing, the structure of the book in the way the essays were grouped was quite appealing and seemed to address the general categories of challenges from the New Atheists well: These authors certainly are nicer (and at times more academic) than the New Atheists have a reputation of being. Love them or hate them, however, the New Atheists seem to connect with something in their audience when they are at their most acerbic, sarcastic, and down-right nasty. There is a side of me that wishes that someone would sink to their level and deal with their charges in like form, but it is certainly to Christianity's credit that no one yet has done so.

All in all, God Is Great, God Is Good is a great book from many great writers addressing the challenges levelled by the New Atheists. While a few of these ideas and arguments may be over the heads of some, this book is a perfect introduction for someone who is ready to tackle the hot topics of the debate but is unfamiliar with the major players or where to get started.

This book was a free review copy provided by InterVarsity Press Academic.
By Jared Totten

I appreciate the tip to this book, but I have to say it's ultimately a losing battle. The New Athiests are right, of course, unless they are wrong, and that's really the only argument one can make--sink to their level or not. Their argument is that 1) a large number of beliefs held by an equally large number of religious believers (not just Christian, of course) are demonstrably false (if one trusts the bugaboos of "science" and "history") and 2) those beliefs that aren't demonstrably false clearly require a confidence in otherwordly beings/events/etc which are completely devoid of supporting evidence.

I don't know that this is all that new a debate, but certainly both sides are going to use it to sell books and drum up donations and support. And at the end of the day I would imagine I'm correct in predicting that a hundred years from now there will still be atheists, and still be believers....

You do seem to summarize two of the New Atheists' most common arguments. There are problems with each, however.

1) A large number of beliefs held by religious believers are demonstrably false if you approach the entire project with a naturalistic worldview that presumes the non-existence of the supernatural and anything that can't be examined by the scientific process.

2) The avocates of Intelligent Design would flip to hear you suggest that their beliefs are "completely devoid of supporting evidence". Their argument is that, precicely because of the evidence provided by scientific investigation, their beliefs are not only justified, but perferred over the neo-darwinian synthesis.

Those two "arguments" are not my own, but simply what I see the basic arguments of the New Atheists boiling down to. As such, there isn't really much that the other side--our side--can do. I agree with your post, but what you define as "supporting evidence" for, say, ID, the other side dismisses easily...

I agree with Johnnie about the losing battle. Who can prove anything? God revealing himself to people is sacred, and it seems pretty random.