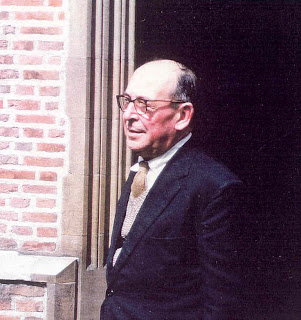 "Some Saturday C. S. Lewis" was introduced and explained here. The following is the first part of a narration from The Magician's Nephew, the prequel to The Lion, the Witch, and the Wardrobe and the first book in The Chronicles of Narnia in terms of narrative time, but the sixth in terms of authorship order. The scene below comes about when most of the main characters are in a dark void on an unknown earth. The whole scene is too long for one Saturday post, so I will continue it at least one more week, maybe two. Sorry to leave you hanging like that.

In the darkness something was happening at last. A voice had begun to sing. It was very far away and Digory found it hard to decide from what direction it was coming. Sometimes it seemed to come from all directions at once. Sometimes he almost thought it was coming out of the earth beneath them. Its lower notes were deep enough to be the voice of the earth herself. There were no words. There was hardly even a tune. But it was, beyond comparison, the most beautiful noise he had ever heard. It was so beautiful he could hardly bear it. The horse seemed to like it too: he gave the sort of whinny a horse would give if, after years of being a cab-horse, it found itself back in the old field where it had played as a foal, and saw someone whom it remembered and loved coming across the field to bring it a lump of sugar.

Then two wonders happened at the same moment. One was that the voice was suddenly joined by other voices; more voices than you could possibly count. They were in harmony with it, but far higher up the scale: cold, tingling, silvery voices. The second wonder was that the blackness overhead, all at once, was blazing with stars. They didn't come out gently one by one, as they do on a summer evening. One moment there had been nothing but darkness; next moment a thousand, thousand points of light leaped out--single stars, constellations, and planets, brighter and bigger than any in our world. There were no clouds. The new stars and the new voices began at exactly the same time. If you had seen and heard it, as Digory did, you would have felt quite certain that it was the stars themselves who were singing, and that it was the First Voice, the deep one, which had made them appear and made them sing.