Lay Your Weapons Down, Ye Jars of Clay 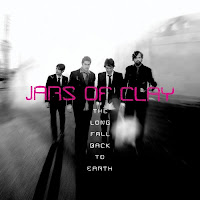 The band that has without doubt shaped my Christianity most profoundly is Jars of Clay. Their recent album, 'The Long Fall Back to Earth' (2009) does not disappoint: its subtlety of lyric and adept diagnosis of the modern condition impress upon us Christians the very 'triumph through tragedy' theme so integral to the reality God is unfolding before and within us. I will always consider Jars of Clay's 'Worlds Apart' as their most important contribution - a bias, I should say, totally derivative of what the song meant to me and my fledgling faith some nine years ago. But alongside 'Redemption' 'Needful Hands' 'River Constantine' and 'O My God' (hat tips to any JoC faithful), I can now confidently place the very probing 'Safe to Land' 'Headphones' 'Scenic Route' and 'Weapons' - all of which seem to centre, more or less, on troubled relationships or marriages. (I think, for instance, the lyrics and crescendo in 'Safe to Land' capture the right kind of 'holy stubbornness' - to use my father-in-law's wise term - that need characterise every Christian marriage. Wonderful song.)

My review of the album about stops there, however, and instead focuses on one of the songs which has for some time haunted me as to its meaning and significance. Track 2 is called 'Weapons'. It elides with the instrumental in track 1 and lyrically opens the album with the following words:

Hallelujah we can finally hear
It's a miracle we feel anything at all
The things we planted on the worst day of the year
Grow to fingers that rip at the joy
And send our backs against the wall.

Hallelujah we can finally see
How the bitterness was bruising on our skin
We didn't notice that grace had run so thin
'Till we're falling apart
And the cracks in our heart let the truth sink in.

Fine so far. Yet the imagery is tantalising beyond these immediate and obvious applications. It presses the metaphor too far, I grant, but nevertheless I ask, somewhat independently of the song: what weapons do we Christians lay down? Especially upon first being found in the Gospel: how might we describe the transformation from darkness to light, from old self to new self, from hostility to grace, in ways more practical than theoretical, more concrete than abstract, more social/relational than simply psychological?

In other words, Jars of Clay has me thinking again, as I have in a few other posts, about what violence is to the world and to the church. I do not doubt the 'weapons' we lay down in our being reconciled to Christ are bitterness and enmity between God and, by extension, our neighbours (and ourselves, for that matter.) Neither do I mean to suggest these do not have practical implications in our day-to-day 'personal' and even 'social' witness, because they obviously do. Then again, I do not think they effect the way a bullet kills an 'enemy' (and maybe a fellow Christian?) on the battlefield. Does the laying down of weapons stop at metaphor? Is war the one area wherein we Christians must accept the Gospel makes no demands upon us, save that we are faithful to the commands which are given and don't take more than our fair share? (e.g. Luke 3.14 and Matthew 8.5-13)

I raise this discussion in full awareness of its relevance and touchiness today. Recent tragedies in the Middle East and Afghanistan certainly show why war is undesirable, yes, but then they also remind those of us prone to abstraction and reveling in comfort that nothing short of real life is being considered here. That simply shows us why this is a really, really hard debate to begin with; and why staying silent about it, on both sides, is just dead wrong.

So in the spirit of contributing something new, besides the sweet CD, let me just share this one observation which hit me rather forcibly this past month. I was (and still am) reading J.H. Yoder's The Politics of Jesus, in which he quotes another scholar Hendrik Berkhof on the point of Paul's 'armour of God' imagery in Ephesians 6.10-18.

'The believer strives ultimately not against tangible men and objects ("flesh and blood," v. 12), but against the Powers they obey. This war with the Powers must be waged seriously. A man must arm himself for it. The arms named...show that Paul is not contemplating an offensive against the Powers. Though surely the believer must assure his defense against them, he can do this only be standing, simply, by his faith. He is not called to do more than he can do by simply believing. His duty is not to bring the Powers to their knees. This is Jesus Christ's own task. He has taken care of this for us and will continue to do so. We are responsible for the defense, just because He takes care of the offense. Ours is to hold the Powers, their seduction, and their enslavement, at a distance, "to be able to stand against the wiles of the devil" (v. 11, cf. 13). The figurative allusion to weapons points to this defensive role. Girdle, breastplate, shoes, shield, helmet, and sword (machaira, the short sword) are all defensive arms. Lance, spear, bow and arrow are not named. They are not needed; theese are the weapons Christ Himself bears. Our weapons is to stay close to Him and thus to remain out of the reach of the drawing power of the Powers.' Quoted in J.H.Y. The Politics of Jesus p. 152.

By 'Powers' he (Berkhof through Yoder) means many things, but one of them is political and institutional. The Gospel is a political witness against this earthly power. The Church stands in the radical humility of Christ who defeated and will defeat these powers, thus her battle is purely defensive: it is not about tearing down institutions, without which society and history could not exist, but about distancing ourselves from institutions and their invariable tendency toward collusion, corruption, and yes, acts of violence as well.

That I must confess I had never contemplated about Ephesians: it is a defensive portrayal of the Christian life. The weapons have been laid down. We have surrendered them to Christ. But what are the weapons? What does it look like, today, now, as Christians, under governments, in tough situations, indeed, in a world where it appears to us that without war there can only be chaos, giving rise to the sense that it must be ordained for the Church to participate in these conflicts?

Indeed, I'm asking, quite sheepishly in fact: what does it mean to be a Christian? A Christian who has laid his weapons down, or wants to, and wants to trust this laying down is in proper conformity to the life and witness the Scriptures, and particularly the Gospel, demand.
By Ian Clausen