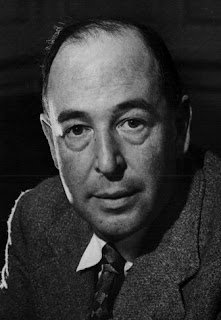 Seeing as how nobody has mastered the art of the orthodoxy to orthopraxy movement like C. S. Lewis, and since nobody is more quotable, I figured I'd start something new on CiC: Some Saturday C. S. Lewis. We'll see how long it lasts, but for starters, I present you with this quote from Miracles:

It is always shocking to meet life where we thought we were alone. 'Look out!' we cry, 'it's alive'. And therefore this is the very point at which so many draw back--I would have done so myself if I could--and proceed no further with Christianity. An 'impersonal God'--well and good. A subjective God of beauty, truth and goodness, inside our own heads--better still. A formless life-force surging through us, a vast power which we can tap--best of all. But god Himself, alive, pulling at the other end of the cord, perhaps approaching at an infinite speed, the hunter, king, husband--that is quite another matter. There comes a moment when the children who have been playing burglars hush suddenly: was that a real footstep in the hall? There comes a moment when people who have been dabbling in religion ('Man's search for God!') suddenly draw back. Supposing we really found Him? We never meant it to come to that! Worse still, supposing He had found us?

Love the single serving of Lewis. This idea of meeting God--of discovering what He may really be like--it would surprise even me. Makes me want to reread "Till We Have Faces" again.

I've recently started a fiction blog based significantly on "The Great Divorce" and its inspiration, Charles Williams' "Descent Into Hell." Anyway, if you're interested, take a look at http://letteroffdead.com

This quote reminds me of something I once heard attributed to Lewis. Whether it was said by Lewis or not, I'm not sure, but it has a Lewis sound to it: