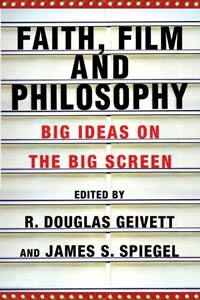 If there was one thing I wish I'd known before reading Faith, Film, and Philosophy, it would have been the fact that it should have been called "Philosophy, Film, and Faith" instead. By sheer quantity of content, there is more philosophy than film or faith, and more film than faith. For you left-brain readers, that would be: philosophy content > film content > faith content.

Faith, Film, and Philosophy is comprised of fourteen chapters, each a different philosophical essay written by a different author. It was certainly made clear that most of these authors' stock in trade is philosophical in nature. Whereas the book dealing with film that I reviewed last month had well over a hundred movies in the Film Appendix, this book had only thirty two films, twelve of those from two chapters dealing broadly with horror and Hong Kong films. The twelve remaining chapters dug deeply and philosophically into just a few movies (one to three at the most). This was enjoyable if you liked the topic or the film (ultimate reality, counterfactuals or The Matrix), but a detriment if you were interested in neither (conciousness, memory or Pretty Woman).

Surprisingly, the chapters I expected to enjoy the most I liked the least. Dallas Willard, one of the few names I recognized among the authors, spent eleven pages summarizing Pleasantville, American Beauty, and Cider House Rules in detail and then only four pages on his topic of "Liberation Through Sensuality". The chapter contrasting the worldviews of U2 in the film Rattle and Hum and Nietzsche seemed both out of place (a live concert video/bio in a list of movies?) and somewhat arbitrary (U2 vs. Nietzsche?).

However, the opposite was also true. The chapters I had the lowest expectations for were a pleasant surprise. Chapters like "Story-Shaped Lives in Big Fish" and "Religion and Science in Contact and 2001: A Space Odyssey" gave me a new appreciation for and a desire to re-view the movies critiqued and analyzed.

Overall Faith, Film and Philosophy was enjoyable and worthwhile though, at times, over my head. This book seems to be best suited for a college-level class to couch philosophy in a more palatable context for the students, or for those looking for an in-depth analysis of one of the few dozen movies used.
By Jared Totten

so... on my google reader feed they added an advertisement for Dianetics.org (L. Ron Hubbard and the Scientologists) to your post. I thought that was funny and scary at the same time