Book Review: Did the Resurrection Happen? by Habermas and Flew 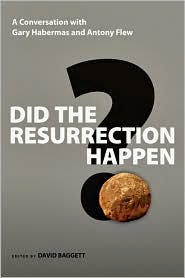 Given the two names on the front of this book, I was initially intimidated at the prospect of picking it up for fear I would be subjected to a pedantic debate between two intellectuals using terms and ideas on par with their intelligence. To my surprise, this was not the case.

Did the Resurrection Happen? by Gary Habermas and Antony Flew read less like an advanced theological textbook and more like a conversation. This is, of course, because two-thirds of this book were originally conversations. The book is divided into three parts, the first of which was basically a transcript of a debate between Habermas and Flew that took place back in 2003 during an event held by the Veritas Forum. This section was an engaging read and altogether too short.

The second part was also a transcribed conversation between Habermas and Flew (long time friends) regarding Flew's journey to theism, an event that sent shock-waves through both sides of the atheism/theism debate. Through both of these sections I was pleasantly surprised to find the conversational style a very accessible read a la Lee Strobel (minus the hint of feigned scepticism).

If one section seemed cumbersome and out of place, it was the third. Written by the editor, David Baggett, it was actually longer than either of the first two sections. Unfortunately, it fell victim to the very intellectual inaccessibility who's absence made the first two sections so enjoyable.

While this book won't be convincing to the most hardline skeptics, Christians and the doubters and seekers of Flew's sort will find this a very accessable read.
By Jared Totten