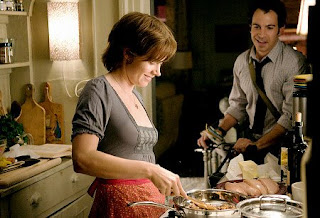 Last week Dr. Mohler posted this piece decrying the disappearance of home cooking in America (ironically alongside the rise of the Food Network on cable t.v.). My recently discovered enjoyment of cooking is probably why the post grabbed my interest, and as a bit of social perception, it's worth a read.

But towards the end Mohler offered his Christian appraisal of the cultural trend, saying:

The Bible dignifies the loving preparation of food as one of the distinctive gifts of women. While cooking is not limited to women, throughout human history wives and mothers, sisters and daughters, have shown their love for and commitment to their loved ones through the careful preparation and celebration of food. When this is lost, something more than culinary knowledge is lost.

Really? Does the Bible dignify cooking as a gift of women? You'll note that Mohler cites no passage in support of that claim in this quote or elsewhere in the article.

He may be thinking of Prov. 31:15, but if we are to take that as saying that all women should cook, then they (a) need to start their cooking the night before the food is served, and (b) need to be doing a whole lot more than just cooking (cf. vv. 13, 15, 16, 19, 22, 24). That is to say that whatever Prov. 31 is doing, it is not listing specific activities that make good wives. And beyond that I know of no other Biblical text that calls cooking a "gift" unique to woman.

Which means that Dr. Mohler is wrong: the Bible does not commend cooking as a woman's gift. It may be that women are seen cooking much more often than men in the Bible, but that is not the same as saying that women are gifted cooks and therefore should continue to cook today if they want to truly be Biblical. Women generally cooked in ancient cultures, so of course they are more regularly the cooks in the Bible.

And here's why I bring it up: complementarians have a tendency to exaggerate the Biblical prescriptions for male and female roles. Put another way, biblical complementarianism does not commend every attitude or activity associated with traditional male/female role distinctions.

But Dr. Mohler has done exactly that (i.e. appeal primarily to traditional rather than biblical role distinctions) in the quote above: after saying that the Bible dignifies women as the gifted cooks (again, with no Biblical citation to back the point), he immediately shows that women have historically been the cooks. True, but that doesn't mean that it is biblical!

A woman can submit to her husband as Eph. 5:20-32 commands without being the primary cook, or for that matter, the one who cleans the house, home schools children, and so on. These are traditionally female roles, but not biblically mandated ones. I don't even know of a passage that dictates that husbands should be the primary bread winners (gasp!).

Some Christian families will inevitably look more traditional in the sense described above, and I am not suggesting that they are being unbiblical by doing so. What I am suggesting is that the Bible is silent on some of these issues, despite some broad claims to the contrary.

My own wife hates cleaning (so we share it), has less time to cook when school is in session than I do (she's a teacher), makes more money than me (I'm an associate pastor at a small church), and we don't plan on homeschooling.

And I for one don't think the Bible gives any reason to change any of that.
By Andrew Faris

You bring up a good point and a matter that confuses me. When is culture/tradition something that should be "submitted to" even when there is no biblical command? For instance, Does the Bible specifically command women to cover their breasts, specifically? Also, I have a friend whose young teenage son wants to wear bright red lipstick to high school. Actually, wherever his goes. For that matter, what if our pastor decided he wanted to preach wearing bright red lipstick? Does the Bible specifically forbid either?

On the other hand, surely you are correct in noting that there is no right and biblical culture that we should be trying to replicate here and now. I assured our 15 year daughter last night that we will not be arranging her marriage. I’m thinking I’m okay with God in giving her that confidence.

i just wanted to say that i for one am breathing a little easier today, knowing that somebody else has had these thoughts (a guy, even).

i know that Titus 2 is cited a lot as far as women being the primary keepers of the home. do you think that could be a true universal (it's pretty straightforward), or could it also be just a culturally salient sign of living "godly, upright lives" in that' time? (it's not like women had the option of being good housewives or good career women; more like good housewives or idle gossips, or worse.)

anyway, i do wish that we could lighten up on this "women's work" thing. not only does it make me feel either rebellious or guilty for not knowing how to sew or letting my fiance help me clean, but it stigmatizes domestic impulses for men, which is too bad.

I'm Andrew's father and I cook almost all the meals in our home, especially since my wife works as a nurse outside the home, is completing a masters degree and is otherwise occupied with life's many demands. Over the course of our 33 years (this month!) we have adjusted and readjusted such roles as money tracking and bill paying, cooking, cleaning, childcare, etc to serve the times and situations we were in the best.

Throughout our lives, we have sacrificed and fought for each other to fulfill our respective callings as a nurse (her), a counselor and pastor (me), parents (us), and so on. We see these things as sacred callings and our roles and tasks revolve around helping each other to fulfill them at the highest level, which has also included graduate school for each of us, geographical moves, etc.

Every morning, I bring my wife a cup of hot coffee and some fruit into where she is getting ready for the day. I cook, as I said, almost all our meals, plus our two at-home kid's meals, and actually enjoy it. I consider it an honor and privilege to serve this woman whom I respect immensely. Is that biblical enough fer ya'?

In short, let me say that we should utilize a few basic biblical principles when we get to gray areas. These would include freedom, love, wisdom, and so on. 1 Cor. 8 & 10 and Rom. 14 look to freedom and the concern for Christian community/edification. And I'd suggest that wisdom is an unfortunately underrated character trait these days. So I'm not advocating a full regulative principle-type approach to NT ethics/decision making. I'd heartily say "no" to the questions of your second paragraph.

Let's take the women's breast exposure issue. The reason women shouldn't walk around with exposed breasts is simple: our culture considers women's breasts to be sexually explicit. So women are being immodest and leading people to lust, which are obviously wrong Biblically wrong.

So culture has a clear influence, but it doesn't make something right or wrong. I think "principles" becomes a key word. What are the biblical principles guiding biblical instructions, and how do they work out today?

So cultural norms can be either right or wrong, worth continuing or worth opposing.

Titus 2 is an interesting one partly because there is so little there. Just a couple words in a list.

My wife and I were discussing the different ways you could take that, and one option that seemed reasonable was, "WORKING at home." That is, women shouldn't stay home (since they mostly didn't work out of the home then) and be lazy. They should be working when there. The emphasis would fall on "working," not on "home".

But that's admittedly a sophomoric answer. I've not looked into it seriously, but I think I will!

In the mean time, I'm glad that you are breathing easier...