Why We Should Read the Pope 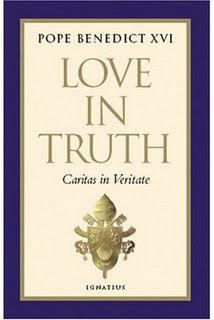 I'm usually very appreciative of the thoughts of NY Times columnist Ross Douthat. His recent entry makes no exception: 'The Audacity of the Pope' is a great slap in the face to those dismissive of Pope Benedict's recent encyclical Caritas in Veritate, and a great exhortation to those of us who didn't care to give the Pope any thought at all.

The call to explode 'Republican/Democrat' polarities is no new thing, but it is fascinating how stubborn and resilient many Americans can prove to be when it come to expressing themselves politically. Douthat is right to state the Pope isn't a conservative or a liberal. He's the Pope. To the extent that lets down American Catholics and religious leaders tells us more about them then it does about Pope Benedict.

Of course the rejoinder to this is all too easily imagined: how is the Pope in any sense 'politically relevant' if he's taking so many divisive positions? Douthat talks of the so-called 'transcendent politics' that many characterise the Pope as espousing. Classic line from modernity. Actually, one finds this talk often enough in historic Lutheran exegesis of Jesus' Sermon on the Mount. The point of labeling something as 'transcendent' is to dismiss or applaud it as idealist, otherworldly, etc. Whereas I should like to think - I pray Christians should like to think - that the Sermon on the Mount is a message for this world, not for some other one. It certainly needs to be interpreted; but it certainly is not suspended until we sort out our own problems. It cuts - now.

The Pope's encyclical is not the Sermon on the Mount. But it is the Pope's encyclical. And at the very least it teaches us that to 'transcend politics' is really to speak plain political sense, or at least to try. American evangelicals need to recognise this point: when we stop thinking through the Gospel, and start basing the terms of our political involvement in the prevailing ethos of the modern liberal state, we give it up. We surrender the political message of the Gospel. We subsume under political categories. We cease to be witness.

In this vein, it should make no sense for any evangelical to call herself 'personally' Christian but 'politically' conservative, or 'politically' Republican. The presumed translation from Christian to conservative just does not occur, either historically or today. What is the most determinative reality of your existence? Whom do you call Lord? Evangelicals have the language to see this point through: we wax eloquent of giving our all to God, of surrendering our money, job, family, our very lives. I say, no less for politics! Let the impracticalities of the Gospel be voiced! We do not control history; God controls history. What it then looks like to live in a society that does not honour the Gospel is, not to silence it, but to hold steadfast to it. Our most determinative allegiance belongs to nothing else.

So let's read the Pope. Let's disagree with him. Let's declare Amen. But let's not miss out on what he has to teach us. The battle is too fierce to mistake friend for enemy.
By Ian Clausen