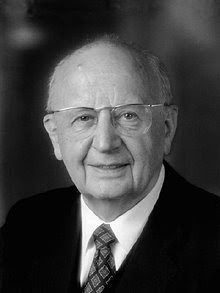 By now you've probably heard that Martin Hengel died last week. Some will not appreciate the significance of Dr. Hengel in the world of NT studies. For that matter most of us probably won't simply because it is almost hard to overestimate how important his work is.

John Dickson has a post up on Koinonia that recounts his time interviewing Dr. Hengel not long before he died. I highly recommend Dickson's account. It is both a helpful introduction to Dr. Hengel the Scholar and Martin Hengel the Man. Not that I ever knew him, but Dickson's account comports with something Clint Arnold (who studied with Hengel some at Tubingen) once told me in a Talbot class, namely that despite not being evangelical, he had the heart and piety of an evangelical in many respects. He was no cold, stiff scholar who sat around endlessly critiquing.

And for this wannabe scholar, that sort of thing is both encouraging and inspiring. Do go read Dickson's piece.
By Andrew Faris