What is Political Theology? Here's a Start. 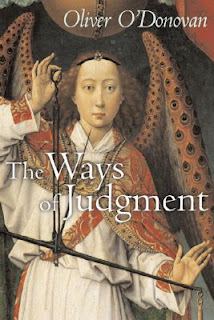 It is at once extraordinary encouragement and insufferable intimidation, when one happens upon some exceptionally executed conception of what is in these our modern times. I can do no better than to share it with you, then, with humble hopes that it may also serve as my point of departure for future commentary. From Professor Oliver O'Donovan (2005):

Christian political thought has also acquired a secondary value in the circumstances of our time, which may, however, be no less important: it has an apologetic force when addressed to a world where the intelligibility of political institutions and traditions is seriously threatened. Christian theology sheds light on institutions and traditions, to address a crisis that is more pressing on unbelievers than on believers; and so it also offers reasons to believe. In our days it is not religious believers that suffer a crisis of confidence. Believers did suffer a serious one two or three generations ago, and the results of that crisis in small church attendance and the de-Christianizing of institutions are still working themselves out around us. But that crisis was predicated by the presence of a rival confidence, a massive cultural certainty that united natural science, democratic politics, technology, and colonialism. Today this civilisational ice-shelf has broken up, and though some icebergs floating around are huge - natural science and technology, especially, drift on as though nothing has happened - they are not joined together anymore, nor joined to the land. The four great facts of the twentieth century that broke the certainty in pieces were two world wars, the reversal of European colonization, the threat of the nuclear destruction of the human race, and, most recently, the evidence of long-term ecological crisis. The master-narrative that was to have delivered us the crown of civilization has delivered us insuperable dangers. So Western civilization finds itself the heir of political institutions and traditions which it values without any clear idea why, or to what extent, it values them. Faced with decisions about their future development it has no way of telling what counts as improvement and what as subversion. It cannot tell where "straight ahead" lies, let alone whether it ought to keep on going there. The master-narrative has failed; and even its most recent revised edition, announced as "postmodern," which declares the collapse to be the glorious last chapter, and plurality to be the great unifying principle, merely stands to the failure as the angel in the famous Czech joke stands to his own constant failures of prediction: "It's all in the plan! Don't worry! It's all in the plan!"

My apologies for length. However let this be, as I suggested, a point of departure toward some reflections on 'political theology' as it might be understood in late-modern societies. One question to ask is whether North American political institutions, and particularly the US, can in the same sense as Europe rediscover resources from the Christian political tradition which will render its 'values' intelligible. Or was America simply estranged from its inception?
By Ian Clausen

Ian, I have a question for you, not related to this blog per se, that I'd like to discuss w/ you over email. I believe my email information will be visible on your end, but if not, could you leave a comment w/ your email on the website attached to my comment and I'll contact you that way. Thanks.

That didn't work the way I hoped - no chance for me to input my info. Leave a comment on one of my posts over at TF; I'm James.