UP, Marriage, and Pixar's Divorce from Modern Ideals 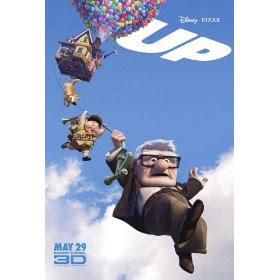 It is almost needless to repeat that UP is a great movie. Enough people have already said that, and they are right.

My wife and I went out and saw it tonight, which turned out to be more significant than I expected. Britt and I have been married for just over two months, and here we watch a film that centers on an old man at the end of his long marriage. They meet as children, marry, and love each other until she dies (and even then he goes right on loving her). Most of the movie takes place after her death and explores how he deals with the pain of her loss and dreams left unaccomplished.

The entire marriage, from wedding to Ellie's funeral, unfolds in a montage that can't be more than 5 minutes, and that's probably generous. Yet in that brief space, without a single word exchanged between the two, the depth of Carl and Ellie's love and companionship hits the viewer so deeply that Britt and I (and many others I've talked to) cried, and you could almost say "wept", when Ellie died and Carl was left alone in the church after the funeral.

Which got me thinking: isn't it strange that in a culture like ours that is so utterly confused about marriage, a life-long, faithful, sweet marriage is seen so highly that it can drive an American box office smash hit? Everybody can get behind how great Carl and Ellie's marriage is.

So why can't everyone get behind how great marriage is? Our culture tries and tries and tries to pretend that we can call marriage whatever we want, that marriage is really just something two people who live together do when they want to have kids, or even that the freedom of single life is far better than the possibility of casual sex with no ball and chain to hold you back. But then UP comes along, and everybody who isn't a sociopath has to watch two old people dancing together towards the end of a long marriage and think, "That is beautiful."

I suppose the marriage detractors I have most in mind are the types who look at me and Britt (25 and 22, respectively) and say, "Gosh, you are getting married young." One of Britt's co-workers actually told her, "Well that's great for you, but I could never get married that young." Really? You really don't want total commitment from a man who loves you so much that he's willing to say, "I want you and you only for the rest of my life"? You'd rather have clubbing, casual dating, and hook-ups? Why not?

Partly, to be sure, because as some other of Britt's co-workers lamented to her this very evening, quality men are at a serious lack. True enough. I know a lot of wonderful single women and relatively few wonderful single men by comparison.

But what I am reminded of so powerfully by UP is that the joy of a life of commitment between two people is something that cannot be found in any other way. This is not to say that marriage is better than singleness: serving God is better than not serving God, and He brings that out of us in different ways according to His good purposes. It is to say that the culture can keep the freedom and fun of casual sex and dating without ever committing. I'll stick to loving my wife and appreciating her joy in me, my joy in her, and our faithfulness to one another.

And that's a good reminder for this newlywed.
By Andrew Faris

Well, I've got a little ways to go before I resemble Carl from the movie, but your mom and I will reach the 33 year mark in August.

I had the same pleasant surprise when I saw the film. Let me say that one of the great delights of being your Dad is to witness the way you and your older brother cherish your wives, hold a high view of marriage and love the Lord.

If you two could be cloned, there would be a few more truly good guys out there for those good women (like Britt and Colleen) to snag!

"So why can't everyone get behind how great marriage is?"
I think Christians and Christian community try to explain Marriage and it merits, but there are two messages being given. One how good marriage is, and an equal message of how bad it is. I got married at 21 and my wife was 22, and I would say the overwhelming response from christians and non christians alike was negative. Even married people would say how crazy it was to get married young. They viewed marriage as a burden.
The church in theory says marriage is a good thing, in reality the majority of Christian marriages look like non Christian marriages. The divorce rate speaks of the testimony of marriage. It is hard to convince someone that marriage is sacred and special if the testimony of many christians is the opposite. The only benefit to marriage ends up being political. I think Christians have a hard time arguing marriage as between a man and woman because the only apparent benefit to others is the business and political allowances that married people enjoy. Other than that after a length of time many who are married only have complaints about the life long contract they are stuck in. If those are the only benefits than everyone should have those same opportunities.
I remember when we were in pre-marriage classes at the church there were about ten to fifteen other couples in the room with us.
The pastor walked in on the first day to a room full of couples who were all giddy with love and excitement. The first thing he did was look at everyone and said, "half of you in this room will be divorced." Even he didn't have a good feeling about our futures.
Eleven years later I can say I am more in love, and can't wait for the 33 year mark and beyond. I don't the definitive answer for marriage, but christians could do a lot for their argument by improving their testimony.
Nate