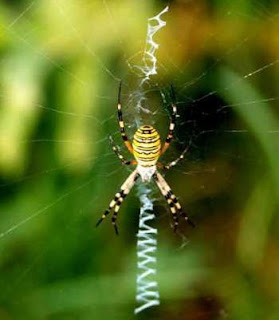 Fun fact: Jonathan Edwards was really into spiders (and not just ones that were dangling by a thread over hell...). Maybe you are reading this and saying to yourself, "That's old news, Andrew- you really didn't know that?" Well, no, I didn't. Not until I came across it in Marsden's biography, which I'm currently working through at a leisurely pace and, I should say, enjoying immensely.

When he was sixteen or perhaps earlier, Edwards became fascinated with the behavior of spiders, one of the creatures with which New Englanders were constantly surrounded. During his senior year in college, at age seventeen, he wrote an engaging account of his observations. His admiration for spiders is apparent throughout. 'Of all insects,' he began, 'no one is more wonderful than the spider, especially with respect to their sagacity and admirable way of working.' (Marsden, 64)

Edwards tried to publish his work in Philosophical Transactions, the journal of the Royal Society in London. The Royal Society was devoted to "natural philosophy" (we call it "science," but as Marsden notes, science, theology, and philosophy were not seen in opposition then the way they are now, which the name of the discipline indicates). In Edwards' day, Isaac Newton himself still presided over it!

Unfortunately for Edwards, an English naturalist named Martin Lister had already covered the same ground, so he did in fact get published. But apparently Edwards' work was otherwise worthy. Pretty remarkable, if you ask me.

While I have posted on this just because I thought it was interesting (I have no grand theological point), I should follow Edwards' lead by making one theological corollary. For me it has always been easier to be amazed at the details of God's creation than the vastness of it. The universe is so massive that I find myself unable to grab any mental hold of it, which in turn makes it hard for me to be particularly moved.

But detail can be examined, and spiders are a good example. Like any creature, spiders have an incredibly small yet incredibly complex set of internal organs. Included are those that allow them to produce the material for webs. Further, God has given them not only the tools for web-making, but the requisite skills to use those tools.

The complexity of detail in all of this is absolutely mind-boggling to me. What a testament to the amazing detail-orientation of God's mind, and to the amazing provision that God makes for His creatures!

I have trouble putting together furniture from Ikea (granted, not the greatest instructions usually). God knows how to put together the inner workings of tiny insects. Talk about inscrutable knowledge. Jesus told us to consider the lilies of the field. Edwards apparently took that seriously (only with spiders), and we would do well to do the same.
By Andrew Faris