Star Wars and The Gospel 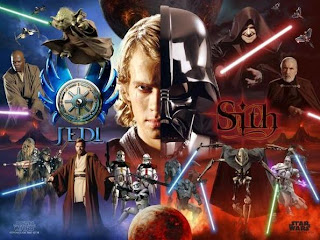 I’m only 50 pages into offering a forthcoming review of Michael Bird's new book Introducing Paul and came across an interesting analogy. Seeing I have an unhealthy obsession with the Star Wars series I simply had share this comparison Bird draws between Adam, Christ, and the Skywalker's.

In want of a modern analogy, George Lucus’s six-part saga Star Wars can be called a ‘Tale of Two Skywalkers’, and in many ways mirrors the Adam-Christ contrast of Romans 5 and 1 Corinthians 15, where Adam and Christ stand for the two respective heads of humanity. They are representatives or types of either a corrupted humanity (Adam) or a redeemed humanity (Christ). The first Skywalker (Anakin Skywalker) faced the temptation to give in to the dark side of the force: he gave in to it and death, destruction and chaos followed. In contrast, the second Skywalker (Luke Skywalker) faced the same temptation, but was faithful and obedient to his Jedi vocation, and consequently hope, life, and the triumph of good followed. In fact, Luke was able to redeem the first Skywalker, his father Anakin, from evil through his faithfulness.