The Bible and Alcohol 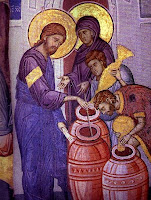 Some time ago I read an essay from Dan Akin called The Case For Alcohol Abstinence. I found the article when I was contemplating going back to seminary at Southeastern, where students had to promise to not consume alcohol while enrolled.

My views on alcohol differed, but I was willing to comply if need be as I was by no means married to alcohol. During that seminary search I found the article.

In the beginning of Dr. Akin's article he notes his personal bias in that alcoholism killed his father. My own father has battled alcoholism for nearly 30 years and his antics have destroyed much of my youth and somewhat still does to this day, so I can relate. So while I understand well that alcohol abuse has destroyed many lives, the big question remains:

CAN ONE ARGUE BIBLICALLY THAT THE CONSUMPTION OF ALCOHOL IS A SIN?

I would say "no". Rather than getting too far into why (most people know why; John 2:1-12) I'm going to point you in the direction of a post by Scot McKnight. His short but sweet summary does an excellent job of pointing out the flaws in the argument "against" consumption of alcohol.

The article can be accessed HERE.
By Damian Romano

CAN ONE ARGUE BIBLICALLY THAT THE CONSUMPTION OF ALCOHOL IS A SIN?

Unless, of course, they are prepared to declare Jesus a sinner. In that case I think they would have bigger issues than whether or not I have wine with dinner.

Everyone should avoid both outside their proper context: Alcohol=moderation/not drunkenness. Sex=marriage.

Some people should never have any: Alcohol=Those who could be addicted or cannot control themselves. Sex=Those with the gift of singleness.

Some people should avoid until the proper time: Alcohol=those under the age of 21. Sex=those not yet married.

Stan, you're absolutely right. Though I've actually heard a Pastor (cough, cough, JOHN MacArthur) say that the wine Jesus did not contain alcohol. Eisegesis anyone?

Daniel, decent analogy, I think helpful. I guess the argument in favor of complete abstinence is simply alcohol can be a sin. But that could be said of just about anything.

"I guess the argument in favor of complete abstinence is simply alcohol can be a sin."

Yeah, totally, thats exactly what I'm saying. Alcohol can be a sin but so can sex. I don't see anyone saying that sex is intrinsically wrong. It is only sin when done outside of the God given context.

I'll drink to that!