A Review of Sam Storms' Chosen for Life 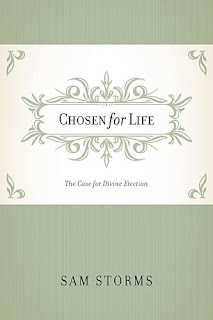 True confession: despite having been a Calvinist since 2002, it was not until these last few months that I actually read a whole book on the subject. Some theology nerd friends started telling me about Calvinism when I was a freshman at Biola. They showed me the passages, I was convinced, and no other interpretation has swayed me yet.

So when I graduated from Talbot a few weeks ago and my uncle gave me a copy of Sam Storms' Chosen for Life as a graduation gift, I thought it was time to make my way through a Calvinism book for two reasons: (1) there may be aspects of the system left out in my reading of systematics, commentaries, and my conversations with friends and professors; and (2) I was hoping that if Storms' book was good, I would be able to confidently recommend a book on the subject when asked.

Given these goals, I was not disappointed. Chosen for Life excels as an introduction to Calvinism (or at least to divine election, which is the heart of Calvinism). If you are an experienced, widely-read Arminian, Storms' exegesis is unlikely to convince you. But if you are new to the subject, you will receive an introduction to both systems that even Arminians are likely to think fair, while confronting the arguments that have convinced Calvinists.

The book begins with the hypothetical brothers Jerry and Ed. Both have been to church plenty, but neither is a Christian. Sitting in church like they often do one Sunday, Jerry is listening to just another sermon, but this time his heart is awakened to the truth of the gospel. Why has Jerry suddenly repented and given his life to Jesus when he never had before? Storms repeatedly returns to this hypothetical and explains how each system interprets it as he unpacks them both.

The book has two chapters on unconditional election in the Gospels and Epistles and three more dedicated specifically to Romans 9. Clearly Storms hedges his bet that Romans 9 will be (as it was for me in 2002!) the most convincing passage for his case. Finally, Storms closes with a defense of a defense of Calvinism (yes, you read that correctly), and both here and in his introduction suggests that the debate, provided that it is humble and loving, is worthwhile because our apprehension of the glory of God is at stake (cf. Eph. 1). There are also three appendices, the most important of which is his discussion of "problem passages" for Calvinists.

As Carson's endorsement suggests, fairness is indeed one of the key features of this book. Storms' explanation gave me a greater clarity on the Arminian understanding of prevenient grace (just before he of course argues that it is entirely unbiblical!). I suspect that any Arminian who read the book would appreciate the irenic tone and clear presentation of Arminianism.

That said, the Arminian may be frustrated where I myself was: Storms repeatedly insists on the all too common but misguided Calvinist argument that the Arminian understanding of salvation violates a true "grace alone" view of salvation. While I do agree that Calvinism understands the grace of God in salvation more biblicallly than does Arminianism, I am unswayed by the idea that a free choice to receive Christ constitutes anything close to what the Bible calls a "work." I have given my argument for this elsewhere on this blog, so I won't rehash it here. This is one of the most glaring drawbacks of this book, especially since it works best as an introduction.

If you were raised in an American non-denominational evangelical church like me, you were probably raised an Arminian by default, even if you would never have known what that word meant (I certainly wouldn't have). When my friends started commending this crazy "Calvinism" to me, I reacted negatively until they kept taking me to the Bible. Storms does that in this book. If you are new to this subject and want a clear, fair but decidedly Calvinist introduction to the doctrine of divine election (or if you know someone else who fits that description) go get Sam Storms' Chosen for Life.
By Andrew Faris

Andrew, I too have my reformed leanings in regards to soteriology. I had to read a co-authored book by two of my professors from Covenant Seminary - Why I'm Not An Arminian. Oddly enough, two theologians from Asbury Seminary wrote the counter - Why I Am Not A Calvinist. This was done as a series, I believe by IVP.

Anyways, I was wondering if Arminians truly believe in total depravity, or at least in the sense of the reformed way. For a reformed person, total depravity says we are in a state of sin and spiritual death that does not allow us to, in any way, make a choice of responding to God. Thus, the Spirit has to awaken and regenerate the heart first before we can respond. But the Arminian would say that, in salvation, the Spirit does a drawing work, but not a regenerative work, so that we can choose to believe.

Thus, I am not sure an Arminian believes in total depravity in the reformed, Calvinistic sense. Your thoughts?

Andrew, great post. I've always wanted to read this book but felt it might be a little elementary to the subject. I'm a little more well read on the subject of Calvinism probably more than any other area of theology. Not an expert by any sense of the word, just well read. Why? Because I probably struggled with it more than anyone I know.

That said, in reference to Scott's question, I think you're correct that the Arminian doesn't understand depravity in the same way. The Calvinist renders the sinner completely dead spiritually (Eph. 2:1) and wholly unable to respond to the call of God (Rom 8:7). While the Arminian renders the sinner dead but with the ability to respond to God. But that doesn't really equate with the references to one being dead, but more-so dying. And the Arminians argument rest on the fact that if God requires (demands) we repent and we don't have the ability to do so, then God is unjust.

However time after time Jesus and Paul (and others) make reference after reference that we simply do not have the power on our own, only that which the Spirit gives (or enables) us. Hence John 6:37, 44, 65.

It depends who you ask.

In one sense Arminians do believe in total depravity because it is the only biblical thing to believe. They read Eph. 2 and Rom. 3 as well.

The difference is prevenient grace, at least according to Storms, and he quotes serious Arminians to that end. The Arminian says that prevenient grace is out there for everyone, making it possible for even a totally depraved person to make that decision toward God.

So, many do believe in total depravity still, but they believe that instead of irresistible grace and unconditional election as God's gracious response, prevenient grace makes it possible for human will to respond.

But you're right, some Arminians simply don't believe in total depravity at all. I don't have the book in front of me, but I think Thomas Oden was one of those Arminians who doesn't believe in it.

In reading just the first part of Storms' book, I got the feeling I was experiencing what CS Lewis calls chronological snobbery. It was kind of like hearing two people argue about the greatest baseball player of all time, and confining the list to players from the 1990's and after.

In your article you wrote that having free choice isn't necessarily a "work." I can't for the life of me understand why you call yourself a Calvinist.