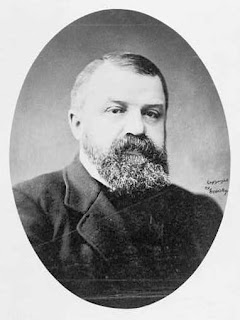 Another gem on Scriptorium, this time from R. A. Torrey (i.e. Fred Sanders posting something from Torrey). Today is D. L. Moody's birthday, and Torrey has posted his essay (originally a sermon?) on why God used Moody.

It is long, but go read all of it. This piece is easily one of the most encouraging things I've read on a blog in a long, long time. Especially if you are a young man like me, you need to go read this post. I really cannot recommend it much higher.

Here are my two favorite quotes from the piece. First, regarding Moody's humility and our need of the same:

Oh, men and women! especially young men and young women, perhaps God is beginning to use you; very likely people are saying: “What a wonderful gift he has as a Bible teacher, what power he has as a preacher, for such a young man!” Listen: get down upon your face before God. I believe here lies one of the most dangerous snares of the Devil. When the Devil cannot discourage a man, he approaches him on another tack, which he knows is far worse in its results; he puffs him up by whispering in his ear: “You are the leading evangelist of the day. You are the man who will sweep everything before you. You are the coming man. You are the D. L. Moody of the day”; and if you listen to him, he will ruin you. The entire shore of the history of Christian workers is strewn with the wrecks of gallant vessels that were full of promise a few years ago, but these men became puffed up and were driven on the rocks by the wild winds of their own raging self-esteem.

(NB: I think this applies to all young ministers who are gaining any acclaim...including bloggers!). Second, on Moody's insatiable commitment to reach the lost:

The sixth reason why God used D. L. Moody was because of his consuming passion for the salvation of the lost. Mr. Moody made the resolution, shortly after he himself was saved, that he would never let twenty-four hours pass over his head without speaking to at least one person about his soul. His was a very busy life, and sometimes he would forget his resolution until the last hour, and sometimes he would get out of bed, dress, go out and talk to someone about his soul in order that he might not let one day pass without having definitely told at least one of his fellow-mortals about his need and the Savior who could meet it.

I pray that God would raise up more of us like Dr. Moody who are so committed to the Lord's work with total surrender to Him, with prayer, Bible study, humility, freedom from the love of money, commitment to reaching the lost, and the special endowment of God's power.
By Andrew Faris

Encouraging, challenging and quite different from what we learned in the post a few days ago, The Seeker Movemement.