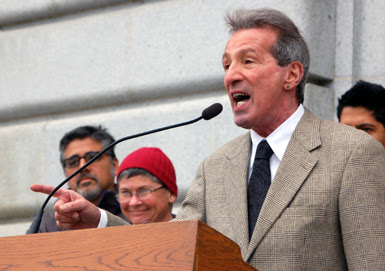 While we're on the subject of smoking, thought I'd mention this proposal from Tom Ammiano to help ameliorate California's apocalyptic financial crisis.

California would become the first state in the nation to legalize marijuana for recreational use under a bill introduced Monday by Assemblyman Tom Ammiano of San Francisco.

The proposal would regulate marijuana like alcohol, with people over 21 years old allowed to grow, buy, sell and possess cannabis - all of which is barred by federal law.

Ammiano, a Democrat in his third month as a state lawmaker, said taxes and other fees associated with regulation could put more than a billion dollars a year into state coffers at a time when revenues continue to decline.

He said he thinks the federal government could soften its stance on marijuana under the Obama administration.

"We could in fact have the political will to do something, and certainly in the meantime this is a public policy call and I think it's worth the discussion," Ammiano said. "I think the outcome would be very healthy for California and California's economy."


A spokeswoman for the Drug Enforcement Agency in Washington, D.C., declined to comment on the proposal. A White House spokesman referred to a statement on a question-and-answer section of an Obama transition team blog that says the president "is not in favor of the legalization of marijuana."

While Californians have shown some tolerance for marijuana, such as use for medical conditions with voters' passage of Proposition 215 in 1996, the proposal will face tough opposition in Sacramento.

A lobbyist for key police associations in the state called it "a bad idea whose time has not come."

But Ammiano's proposal has the support of San Francisco Sheriff Michael Hennessey, who said the idea "should be the subject of legislative and public debate."

It also has the backing of Betty Yee, who chairs the state Board of Equalization, which collects taxes in California. An analysis by the agency concluded the state would collect $1.3 billion a year from tax revenues and a $50-an-ounce levy on retail sales if marijuana were legal.

The analysis also concluded that legalizing marijuana would drop its street value by 50 percent and increase consumption of the substance by 40 percent.

A spokesman for the Marijuana Policy Project, which advocates for reform in marijuana laws and is backing Ammiano's proposal, said any expected increase in consumption is a "false notion."

"They are making an intuitive assumption that a lot of people make that really does not have that much evidence behind it," said Bruce Mirken, the group's spokesman, who predicted it could take up to two years before the idea wins legislative approval.

"Don't tell me that doing something like (this) proposal is going to introduce another drug into society. That's a load of bull."

Sounds like a states rights issue. Where does Washington get the idea that the Constitution gives them the authority to regulate marijuana?!

The real driving factor is organized crime from Mexico - Mexico is near a failed state, and Cali is being overrun. There is significant discussion that decriminalization would lower crime