The Good and the Bad from Ted Haggard on Oprah 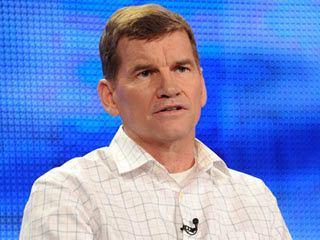 Click here for the link to the first video. It is broken down into four videos total and I didn't feel like posting them all here. Follow the links on the right on YouTube.

I really don't have a lot to say about this series of videos because most of the good and the bad of it is obvious. But to recap:

The Good:
The Bad:

Oprah: "Are you cured?"
Ted: "I don't think I'm cured because I don't think I was ever sick. I think those things are a part of life."

There is probably more to say about all of this, but those are some initial responses. The interview is frustrating, but probably worth a look.

Also, I haven't seen Alexandra Pelosi's HBO documentary yet, but this write-up on it makes it sound impressively fair. Check out this comment:

By the way, it's not just the church who Pelosi views as being unnecessarily harsh towards her unlikely friend. "I hate how the gays want Ted to say, 'I'm gay and I'm out and I'm proud,'" [Pelosi] says. "He's not. He's conflicted. I think there’s more than 'I'm gay,' 'I'm straight.' I'm satisfied with him saying, 'I'm confused, I have a wife and five kids but I struggle with my sexuality, I have these attractions, these urges.' I feel like that's sort of honest. And his wife and his kids are the only things he has left."

Surprisingly good listening from the daughter of, yes, that Pelosi!

While following links from this blog the other day I ran across this wonderful piece:

I urge everyone to read it, and Andrew, I would really ilke you to consider it.

Andrew, I believe you are mistaken in the assumption that Oprah is advocating a lifestyle that is not only dangerous (STD's) but also "unbiblical" as you would put it. The more realistic explanation is for Haggard to admit to himself and others that he is gay, if he truly is gay. (bisexual may be the real answer here) Promiscuous lifestyles are to blame, not gay or straight. Unfortunately for Haggard and frankly, as near as I can see, yourself, is the stunted understanding of Christianity. I don't mean that in a harsh way, but rather to point out that to continue to hang onto this one topic while so many other "unbiblical" practices of days past are now accepted is to stay in the past, to be stunted. Rev. Ed Bacon commented, on, oddly enough also Oprah, that being gay is a gift from God. This strikes me as far more in line with a historical Jesus as opposed to a mythical Jesus worshipped by literalists.

Could you elaborate on how being gay is a gift from God?

Not trying to respond for Andrew, but I've read through Kim's propositions. He's clearly an incredibly learned individual. I still have a number of reservations, and thought this was a pretty insightful and charitable response...

we need to be careful about how we label sin. we are people, not God. we do not have the power or the biblical proof to say that homosexuality is unacceptable or not created by God himself. love a little more, hate a little less :)

Richard Hays has noted that wherever the Bible mentions homoerotic activity, it expresses "unqualified disapproval" (Hays, Moral Vision of the New Testament, 389). The question is, how does this relate to a predisposition (genetic or otherwise) towards homosexual behavior? Paul says that sin is passed through the members of the body (cf. Rom 5-7), so I have no problem acknowledging a biological/psychological component to sin. Thus, if one claims to have a predisposition to engage in homoerotic acts, I am hard-pressed biblically to explain this as anything other than a result of the fall. If homosexual acts are sinful, and the desire to commit said acts is unnatural (cf. Rom 1:23, 25, 26), I'm not sure how else to explain this.

I'm curious Vik, what in the biblical account would lead you to think that homosexuality is acceptable to God?

I'll let Vik answer for himself, but one does not need to look very far to find plenty of theologians, biblical scholars, and religious leaders who mount very thoughtful arguments that homosexuality is acceptable to God. That you and Andrew and others don't accept those arguments is clear, and, of course, your business. But the suggestion that Vik will have trouble articulating his belief--or have trouble finding a religious/theological grounding for his belief--is a mistake.

Also, thanks, Jeffrey, for your responses. I don't agree that Kim was in need of a charitable response, but it was an interesting read.

My mistake: let Vik answer for herself! And she did, while I was posting...

Andrew, I agree with you about Mrs. Haggard's viewpoint on all of this. She seemed to be the only one on that stage truly defending the bible. I really didn't like how Oprah did not address her comment about how we all don't just follow through with thoughts. Just the other day I was thinking about how I would love to go to Europe... but I can't just go an buy a plane ticket. Anyway, she's right.

It is also worthy to mention the part when the Haggard kids spoke out. I thought it was so interesting how they said it was almost a relief to know that their dad was able to make mistakes... to sin... so that they didn't feel so abnormal. I can relate to this - being around people who don't talk about sin in their own life, so when I have sin, I don't want to tell anyone else, which cuts off accountability from the church. I have figured this out now, and will continue to work hard to have people in my life that I can be open with... but I appreciated that comment.

I am encouraged by their family sticking together as they did, and truly hope the best for the family. Sad story.

Having lived outside of the United States for 10 years, coming back to the US about 4 years ago, I was shocked by the turn the church had taken over those 10 years.

What did they expect her to say? She's lost, and leading lots of naive, lost people deeper into the forrest of humanism. Please, let's pray for the Haggards and Oprah. But let's call it what it is , sin. It is what it is.