Andrew Breitbart on the Hypocrisy of Hollywood's Obama-ism 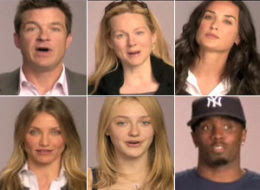 It's a rare triple post day at CiC, but only because we really think it's worth it.

Check out this truly excellent post by Andrew Breitbart of Big Hollywood on the ridiculous celebrity attitudes toward the Obama administration. In particular, Breitbart is (un)inspired by a video (embedded in his post) of celebrities pledging to do a bunch of good, pro-American stuff now that Obama is president, such as generally being a better person, ending 21st century slavery, and turning the lights off when you aren't in a room to conserve energy.

You know, stuff it was impossible to do when Bush was president. I for one got sick of W always showing up at my house and turning on the lights every time I'd leave. It's nice to have a president who won't do stuff like that anymore.

I've got to say, the connection between this post and your stated subject matter--Christians in Context etc--is a bit hard to find. Are you suggesting that Hollywood actors should just stick to their stated subject matter and not branch out to other things? I'd find that somewhat ironic...

Breitbart needs to look up "hypocrisy." It may well be that these things could have happened under Bush, and it may well be that they will not happen under Obama. However, it is an absolute fact--witness the 2 and a half million people in Washington for the inauguration, plus the millions and millions more around the world who watched (vastly different from 2004, 2000, 1996, 1992...)--that people have hope and faith that is, absolutely and not arguable--vastly different from how they felt under Bush.

And if hope and faith are hypocritical....well, that's a mighty odd position for a Christian blogger to take. (And no, I'm not making Obama or those who have hopes in his abilities into religious figures.)

In 2000, there were plenty of folks--they might not have happened to be Hollywood types, but so what--who had hope and faith in Mr Bush. They weren't hypocrites either, although they turned out to be wrong. We should all hope that these Hollywood folks--and the millions of others who believe alongside them--aren't wrong now.

That's a terrible post which only serves to widen the gap between "conservatives and liberals" something Bush-politics cemented into our political discussions. Bush's administration took power away from the people and centered it in a few, making irrational decisions that changed the American landscape without American support. Obama's administration seems to be changing that, listening to those who are ready to change America. What Breitbart doesn't seem to recognize is his own irrational claims --- Hollywood has stood up for what it thinks is right for the past 8 years, now what they think is right is in office, and he's listening. THAT's the difference.