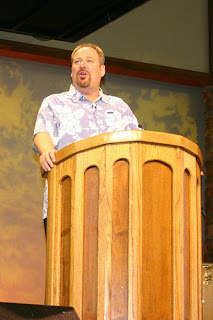 Rick Warren in an interview with Steven Walderman:

But going back to this thing about heaven and getting into a perfect place. Let’s say we got a scale of 1 to 100. Let’s put Hitler at zero and Mother Teresa at 100 OK. And Steve you’re at 85 and Larry’s at 65 and I’m at 45. The truth is, some people are better than others, there’s no doubt about it. Some people are more moral than others, they’re nicer, they’re less selfish, less self-centered, things like that. But the truth is, nobody makes [it] to perfection… And so somebody’s got to make up that difference. And that’s the gift I believe Jesus came to – to make up the difference between my zero and my 100 or my 45 and 100 -- somebody’s got to make up that difference. (HT: JT)

Is it just me, or does that sound like a Mormon understanding of atonement ("Do your best and Jesus does the rest")? I understand the point of the analogy, and I do believe that there are varying degrees of sin, but this at the very least confuses the issue of depravity (whether from an Arminian or Calvinist standpoint). None of us has anything of ourselves to offer for our justification.

The thing is, I don't actually think Warren is any kind of Pelagian or otherwise a heretic. My guess is that if you pressed him on the analogy, he would admit that nobody can present anything meritorious on his own behalf for justification. The problem is that, as Dan Phillips pointed out the other day, he is prone to go from being an articulate, genuine, and likeable representative of Biblical Christianity before our culture to making frustrating theological mini-gaffes when he could be much more careful.

Maybe I'm being nit-picky here, but then, it is the atonement...
By Andrew Faris

I honestly don't see that in Rick Warren's analogy. I don't follow him that closely, but it just looks to me like he's trying to simplify it rather than redefine it. I'm sure if you pressed him as a well studied believer, he would agree with the orthodox definition of atonement.

I remember reading an interview with him in an issue of Modern Reformation some years back where he "stated" he strongly affirmed the five solas of the Reformation. Again, stated.

Hello! My name is Zhenya! I so like your blog! We are from Russia. My wife and I to work with students. We organize many clubs to construct attitudes friendship and to speak them about the Christ. It is good opportunity to testify about our God and His love! It very not usual and new to Russian culture. We are missionary to the Far East Russia. We are russian. We live in city Birobidzhan, it is the Jewish region in Russia. A lot of Jews live here. They have synagogues and to celebrate religious holidays. But many of them do not know the Christ. We have 2 daughters. Polina is 8 years and Liliya is 2 years.And if you are interesting about us I shall be glad give answer to you. I will glad if you can write me.Sorry my English. In Christ your brother Zhenya from Russia

--
You can vizit to our family ministry blog
http://fareastrussiaforgodsglory.blogspot.com

It's the possibility that I 45 to offer that is the problem. And like I said, I also think that if you pressed him on it he would affirm an orthodox doctrine. He just seems prone to this sort of thing.

I think he is more acurately a neo-semi-pseudo-proto-pelagian, with a just a hint of cinammon. But I could be wrong.

It sounds a lot like man does his, part, God does his part. Even in simplicity he sounds just like the contention you are posing in the post, a semi-pelagian.

So I agree with the brethren in this blog.

Is it me or does even the podium has a Roman look to it?

I'm glad you agree (and think your Rome comment is funny), but I want to make sure it is clear that I do not actually think Warren is a semi-Pelagian. I really think if you pressed him on it he would not want the analogy to be pressed to mean that. So my point is that it is just a noticeably imprecise analogy, and these are the sort of comments that can frustrate me so much from Rick.

I think, Andrew, you're being quite charitable, which is a good thing... but I also think it's appropriate to take Rick at his word that what he represents is his view of the atonement. What he's presented there IS semi-pelagianism, and if it accurately reflects his view (which again I am assuming, since I don't think he's prone to false proclamations of what he actually believes) then he's properly considered a semi-pelagian. Arminianism is at its root semi-pelagian anyway, so I'm not so sure we should be so quick to be afraid to call a duck a duck.

Together with this view would go another common analogy that is used in circles like that of Rick Warren - the "God has thrown you a life-line and all you have to to is grab it" approach. Or the God has bought your ticket for the train to Heaven, all you have to do is pick it up. Those are Arminian approaches that are akin to what Rick uses in his presentations. They're completely consistent with a semi-pelagian view, and with what you posted here. I don't think we're doing him an injustice to give an appropriate characterization of his apparent view of the atonement.

I agree. And I try to be gracious too.

I respectfully disagree. I really do think if you asked Rick about this comment, he would back off the implications for justification.

Regarding the Arminian concept of justification you mentioned, I am convinced that it is an unfair characterization to refer to it as semi-Pelagian. Any form of Pelagianism emphasizes our own works, but I do not think that receiving salvation actually constitutes as a work, at least not in any biblical sense of the term "work." In fact, that first step, if it is to the true gospel, is the step that says, "I in no way can justify myself because I am only sin, and I need Christ atoning blood to save me." It is a direct statement of the insufficiency of works.

Don't get me wrong: I still disagree with the theology. But I don't think it is fair to call it semi-Pelagian. I don't think willfully accepting my Christmas gifts this year constitutes as my having done something to earn them, even if I have to walk to the tree to pick them up for myself. And like I said, I am especially unconvinced that the NT has that at all in mind when it dichotimizes grace and works.