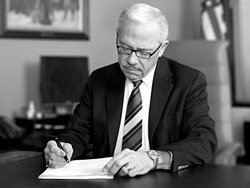 If you live in California, your vote for president doesn't matter. I was talking to a political junkie friend of mine recently who told me that he was going to write Ron Paul in this year. I responded, as I usually do in conversations like this, "Well I don't love McCain, but it's a lesser of two evils vote for me and I don't want to throw my vote away on some third party guy who, while I might like him more, has no shot. Writing in Ron Paul is basically voting for Obama."

This had been a satisfying line of reasoning for me for quite some time, but my friend responded, "Yeah, but we live in California, so it doesn't matter. Our electoral votes are going to Obama one way or the other, and it won't be close."

And he's right. It doesn't matter. This has become a liberating truth: I no longer have to feel constrained to vote Republican, because thankfully, my vote doesn't matter. No more internal turmoil. If only something like this would have been the case when I voted for the Governator over McClintock when Grey Davis got ousted.


I am a supporter of the idea of an electoral college, although I do wish that California's electoral votes could somehow be divided up regionally (including the removal of Bakersfield's voice altogether, because who wants to listen to Bakersfield?) just because the state is so populous and has so much diversity. But in lieu of that, I now have a whole new choice in front of me. And for many of our faithful readers: so do you.

My friend told me that he wants to make a statement, which is why he's writing in Ron Paul even though he's not so sure that Mr. Paul has even asked his supporters to do that. I am considering doing the same, or perhaps voting for Bob Barr, the Libertarian candidate. In any case all of my political interest has taken on a whole new shape.

If you are not in a swing state, are dissatisfied with the two major options, and are quite sure that your lesser of two evils candidate will lose, perhaps you too should consider voting for a third party candidate. If you're going to vote for someone who will lose anyway, why not someone who will lose that you really like? Who knows- maybe a noticeable increase in third party voting will send the two major parties a much-needed message.
By Andrew Faris

I live in New Jersey (or dare I say the People's Republic of New Jersey) and am in about the same situation. This state is disproportionately blue.

By county would be smart.

I think people should stick to voting for one of the two "big" runners.

Ron Paul will never win. But McCain might. And always thinking that California is a blue state screams laziness to me. I don't think you will be throwing away your vote by voting for McCain, and honestly, I think you will be making more of a statement by doing so. Because if the election keeps getting closer in California, I would not be surprised at all if one of these days the electoral college went to the red.

Your vote can't count and not count at the same time, which seems to be how you want to have it. What you're telling me is that voting for a guy who will lose by a million is somehow better than voting for a guy who will lose by 5+ million, when I don't think it really is. At that point, both are going to lose, and they're going to lose handily. And at this point, thanks to the liberalism of the Bay Area and the ethnic makeup of Los Angeles (it's not racist, it's just fact that Blacks and Hispanics will overwhelmingly vote Democrat), there's just no shot for the Republican.

What I would like to see is an increase in third party votes so that they become factors. I think a third party would greatly help the whole political system, so if my vote is going to for a loser, I'd rather vote for a loser whose cause I believe in and who hopefully over the long term will have an impact. Right now, my Libertarian or Ron Paul vote counts for next to nothing. But over time, who knows, maybe it'll amount to something.

A million votes is insurmountable, and I'm sure not going to go out there and rally for McCain if he's a lesser of two evils candidate. I don't think it's lazy so much as realistic.

I have to agree Andrew. I get tired of the conservative christian leaders try to explain why so and so is worthy of a vote now when they condemned them earlier. If their character is flawed Christian leaders shouldn't stand behind that particular person. Voting for the person of good character may be better than party lines. It is not so much making a statement as making the right decision. I think it is an ethics question not a whose more likely to win. Maybe the skewing of ethics even by christian leaders is what has got this nation into the economic problems we have now. I'm not saying big issues like abortion are not important, but personally if we approach many of the small decision with the "which is the lesser two evils" approach we soon can talk ourselves into deciding for an evil. Similar to the latter post about the sub-prime problems. The banks and brokers were partially responsible, but the borrower is just as responsible. Greed of the "American dream" or just a bigger house lent to problem also.
Just my 2 cent...
-Nate-