Are Elders and Pastors the Same Thing in the NT?

In the early days of my CiC blog career I, Andrew Faris the complementarian, argued that women could be called pastors. For those understandably not willing to go back and read that post, let me inform you that my argument hinged largely on my idea that the term "pastor" in the NT is a functional term rather than an official term. "Elder" is the more consistent and defined term for a local church leader, whereas "pastor" is really quite rare. Of course this is flipped around today when "pastor" is the far more common term. If you want to see how that relates to women in ministry, go read the post. It's not worth re-explaining (though note that the woman I referred to in that post is Jenny Bruce, who of course is one of our esteemed bloggers).

As a proud conservative evangelical Calvinist complementarian, I really like getting the rare opportunity to be even slightly edgy. Most times this shows up in my staunch charismaticism (son of a Vineyard-preacher man), with which I like to ruffle the theo-practical feathers of my brothers and sisters who give only lip service (if that) to the gifts. But when the charismatic well of edginess runs dry, I fall back on other rare edgy positions. Thus far the most notable has been my defense of gay marriage, which drew some attention, but I'd like to think that my complementarianism combined with my willingness to call a woman a pastor qualifies as well. This leaves me then with precisely three edgy to moderately edgy positions.

So you can imagine my disappointment when I read these words from Ken Berding's What Are Spiritual Gifts?: 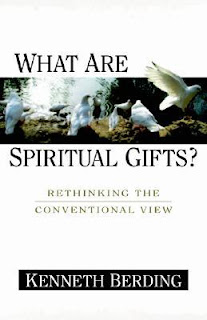 It is probably proper to think in terms of the role of a pastor (literally, a shepherd) in New Testament times as synonymous with overseer and elder. Note particularly Acts 20:28: 'among which the Holy Spirit has made you overseers, to shepherd the church of God'; and 1 Peter 5:1-2, 'Therefore, I exhort the elders among you, as a co-elder...shepherd the flock of God which is among you, exercising oversight.' - Berding, 296 (fn. 15 from p. 90).

Perhaps you see the problem: if elder and pastor are synonymous and I think that women cannot be elders (which is indeed what I think) according to NT teaching, then women can also not be pastors. Which leaves me with only two edgy positions.

So here's my edginess-saving resolution: is it possible that all elders are pastors but not all pastors are elders? I think so, and here is why:

1. Pastors are never told to do the work of elders in the NT- the examples Berding gives necessarily point towards elders doing pastoral work, but not necessarily the other way. So the position is possible.

2. Besides generally exemplary character, the Pastoral Epistles (esp. 1 Tim. 3) give two major requirements for being an elder: having a good home and being able to teach. 1 Tim. 5:17 seems to indicate that some elders did not, in fact, teach. Still, this was likely a major role. It is less clear that "pastoring" necessarily includes teaching. But what about Eph. 4, you ask? Keep reading!

3. This corresponds well with the oft-noted hendiadys in Eph. 4: pastor-teacher is two parts of the same position. If my thesis here is correct, then "pastor-teacher" is basically another way of saying "elder" in Ephesians. So why not just say elder? Is it so far-fetched to think that perhaps some people were doing only one part of those roles, such that while mostly elders would be in mind, God also equips His people by providing leaders who labor primarily (though not necessarily exclusively) in only one of those ministry roles? That is, perhaps there are more leaders than just elders, and Paul wanted to include an at least slightly broader range of equippers in his ministry list in Eph. 4.

4. This makes practical sense. How many people in your church can you name who shepherd other people? Probably more than just the elder(s). But how many consistently teach, or even have teaching as a major part of their job description? Probably mostly just the elder(s). That is probably in part because no single or small group of elders can pastor an entire congregation. Healthy congregations have more functional leaders than just those who are official leaders. But they tend not to have too many teachers, which seems reasonable enough.

OK, so maybe it's a stretch and maybe I am doing nothing more than trying to maintain my edginess. But I do honestly like reading Eph. 4 with that recognition of the hendiadys in mind while still maintaining a distinction of positions, and I do really think it makes sense.

Funny thing is, since I first came up with my "Just Call Her a Pastor" position for women, it's still been really difficult for me to conceptualize calling a woman "Pastor so-and-so." I'm stuck in the limbo of my own wannabe edginess.
By Andrew Faris

As Forrest Gump's mom might say: "Edgy is as edgdy does...". That being said, I move to the subject at hand.

My thoughts are that "elder" had (has)a meaning in middle-eastern culture as it does in all "village communities" to the present day.

There was already precedent for "elders" in Israel but, of course, many of Paul's converts were non-Jewish gentiles. I'm not so sure they had the "elder" mentality their Jewish brothers would have.

In any case, I believe that the apostles appointed elders in the church to function somewhat like the elders would have functioned in the tribe -- not just to "teach", but also to judge disputes, lead by example and defend and pass on the core traditions of the community.

"Pastors" by contrast are imaged as shepherds, not as village elders. They tend and care for the flock, etc. Ezekiel's angry prophecy suggest that the apostate "shepherds" of Israel were guilty of refusing to do very "shepherdy" things to care for the chosen flock of God.

Today (as I point out in my blogs on apostles), the term "pastor" has been stretched far beyond anything I imagine the NT writers imagined ("Pastor" Rick Warren can't truly "shepherd" 20,000 locals, plus the many, many thousands of others he influences, for example). I suspect some of these "megashepherds" are actually apostolic (for more on this: billfaris.blogspot.com).

Anyhow, good thoughts, Andrew. John Wimber used to just say that elders "eld". Now if that doesn't close the book on the subject, what does?D

Andrew, I feel your practical frustration about some of the leadership labels employed in churches. But here are a few quick thoughts. My comments will correspond to the four points in your post today.

1. Isn’t this pretty much an argument from silence? You mentioned in your post that the word pastor is rare in the NT (although the function of pastors, that of shepherding the church, is a little more common).

2. I don’t think that 1 Tim 5:17 is clear evidence that some elders do not teach. If that were in fact the correct reading, the requirement that an overseer must be able to teach would seem to be directed toward something that some overseers wouldn’t actually do (1 Tim 3:2). I’m not certain about this, but it seems that the distinction in 1 Tim 3:2 may be between those who are teaching and preaching a lot (i.e., “laboring”) and those who teach less often but are otherwise “ruling” in the assembly.

3. Granted, it is possible to read Eph 4:11 the way you are suggesting that it be read. But there is a reason that NT scholars are split between reading this as two roles (pastors and teachers) and one role (pastor-teachers). Just because a reading is possible doesn’t make it the most likely. I lean toward the pastor-teacher (one role) reading in Eph 4:11 and toward viewing this all as a single role that Paul uses the words overseer, elder, and pastor-teacher to describe it because it seems the simplest explanation, but this is not the place to argue it.

4. Certainly other people do “shepherd” others, but the metaphor of shepherds as leaders is a very common metaphor in the Scripture indeed. See Num 27:17; 2 Sam 5:2; 7:7; Ps 78:71; Is 44:28; Zech 10:12; and esp. Ezek 34 for people as shepherds. (Of course, there is one Shepherd under whom all under-shepherds do their work.) The common OT picture of leaders as good or bad shepherds seems to be in view in places like Eph 4:11 where shepherds (pastors) are mentioned, and in places where leaders in shepherding roles are mentioned (Acts 20:28; 1 Pet 5:1-2). Where in the NT is the shepherding metaphor clearly used in a non-leadership passage?

Thanks to you and all your co-bloggers for your thought-provoking blogging at Christians in Context!

I love that Dr. Berding commented you, that's awesome.

It's funny that you just came to this revelation after calling me a "pastor" the other day ;)

I do think that you can be a "pastor" and not an "elder", and vice versa. But I am still not sure if that leaves room to let women be pastors. Call me what you want, I consider myself a shepherd of people. Just trying to lead people to Christ and to holiness.

But thanks for wrestling with this...it's helpful to me and my ministry.