Halloween and Christmas: Separated at Birth? 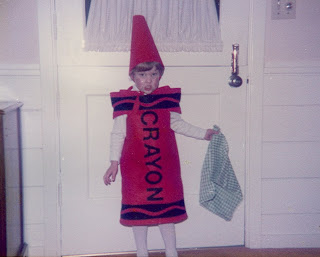 That rather terrified looking three year old to the right is me on the night of my very first trick or treating excursion. (I think the pillow case treat bag adds a nice touch.) With Halloween coming up in just a few weeks and Christmas right on its heels, I thought I'd post some thoughts about our celebration of both holidays.

Both have roots in paganism.
The roots of Halloween date back to about two thousand years ago. The Celts celebrated their new year on November 1st. This heralded the beginning of winter, which was commonly associated with human death. The Celts believed that ghosts of the dead returned to earth on October 31st and their presence made it easier to predict the future. During this holiday the Druid priests made predictions and the Celts built huge bonfires where they sacrificed crops and animals and dressed in animal heads and skins. When the Romans conquered the Celtic territory in A.D. 43, they incorporated two of their festivals into Samhain.

For many years, people were frightened that they might encounter a ghost if they left their homes, so they wore masks after dark in hopes that the ghosts wouldn't recognize them and believe they were fellow spirits. People also placed bowls of food outside their homes to keep ghosts from entering.

Pagan midwinter festivals existed long before Christmas. The Romans celebrated Saturnalia the week before the winter solstice and the festival lasted an entire month. This holiday honored Saturn, the god of agriculture, and included drinking, feasting, and the closing of schools and businesses. The Romans decorated their homes with boughs of evergreen to illustrate how Saturn would soon make their land fruitful. The Germans celebrated the god Oden during this time and the Norse held a celebration called Yule.

Both were established by the Catholic Church.
The holiday known as Halloween was actually created by the established Church. Christianity eventually spread to the Celtic lands and in the seventh century, the Church instituted All Saints' Day or All-Hallows on November 1st. This day was set aside to honor saints and martyrs and some believe it was the pope's attempt to replace Samhain. October 31st was referred to as All-Hallows Eve, which eventually became Halloween. In A.D. 998, the Church designated November 2nd as All Souls' Day, a day to remember and pray for souls in purgatory. Some say that dressing up as devils, saints, and angels was a common practice on this day and the celebration also involved bonfires and parades.

The tradition of "trick or treating" most likely stems from All Souls' Day parades in England. During the celebration, poor citizens would beg for food and the wealthy would give them pastries called "soul cakes" in return for a promise to pray for the family's dead relatives in purgatory. Eventually, children took up this practice and traveled to different houses where they received food, ale, and money. This custom was referred to as "going a-souling."

Christmas was first celebrated in the fourth century when the Church chose December 25th as the date of Christ's birth. No one is sure why this particular date was chosen, but some believe it was due to the fact that this was already a public holiday for pagan celebrations. This would increase the chance that Christianity would be publicly embraced. The celebration spread to Egypt in A.D. 432, to England in the sixth century and to Scandinavia by the end of the eighth century.

Both can distort the truth.
Halloween turns witches and the devil into cute and cuddly characters and chubby cheeked toddlers seem to have no qualms about trick or treating dressed as Satan. Christmas takes the frightening, harsh, and beautiful story of Christ's birth and transforms it into a cozy little tale about a cheerful barn, some happy animals, and a little baby who didn't cry.

Check back in a few days for Part 2 and find out what else Halloween and Christmas have in common, including their connection to Linus Van Pelt.
By Jenny Bruce

I completely stopped celebrating all "Christ related" pagan-born holidays a few years ago, and with each passing year, God continues to further open my eyes to the spiritual wastefulness of it all.

Interesting information about Halloween and Christmas. Thanks..!

“The Celts celebrated their new year on November 1st. This heralded the beginning of winter, which was commonly associated with human death. The Celts believed that ghosts of the dead returned to earth on October 31st and their presence made it easier to predict the future”.

Firstly it is important to remember that there was no 'Celtic' nation but rather smaller tribes which all had their own customs. There seems to be no doubt that the opening of November was the time of a major pagan festival which was celebrated, at the very least. At most, it may have been general among the ‘Celtic’ people. There is no evidence that it was connected with the dead, and no proof that it opened the year, but it was certainly a time when supernatural forces were especially to the guarded against or propitiated; activities which took different forms in different regions. Its importance was only reinforced by the imposition upon it of a Christian festival which became primarily one of the dead.

By the end of the Middle Ages, the Christian feast of the dead, had developed into a spectacular affair, for which there are ample records in England. The concept of purgatory, the belief that the living could assist the condition of the dead by praying for them, and the notion that saints could function as intercessors between humans and Christ or the Christian God. In 1928, the Church of England restored the feast of All Souls as a commemoration of the dead.

From research it is clear that modern Halloween has a joint legacy of a shadowy pagan festival and a Christian feast of the dead in the various communities of the British Isles, as manifested in the past couple of hundred years.

This date comes from and appears in various myths as the ‘birth of the sun’ at Midwinter. Christ’s birth follows the same mythological role/archetype (which of course does not mean that Christ was/is unreal merely that he also fulfill that mantle. Very interesting blog, thanks.